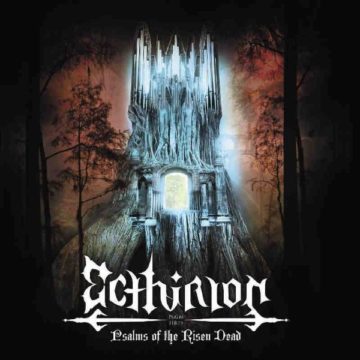 Finding the commonalities between the grandiosity of orchestral music and the aggression of heavy metal is a much more meticulous process than it may seem on paper. Both contain raw passion and power that ignites around each note, so to marry these distinct worlds of instrumentation is something many have tackled for decades and with mixed results. The latest album from UK-based Ecthirion, Psalms of the Risen Dead, is an example of when that ambition is more prominent than memorable song structure, which is lacking anything of true substance or vision.

Now there are elements to this release that do deserve some praise: their use of actual instruments as opposed to a “synthestra” doesn’t go unnoticed, some of the guitar passages are very tight, and the vocal performances cover a wide range that make for some nice harmonies such as in “Chariots of Elysium.” However, even when they seem to be at their “heaviest” it proves to be nothing but formulaic, working through rhythms and stylings that their influences have not only done in abundance but have done with a clearer sense of direction. As there are many moments where instruments and melodies appear simply for the sake of it, not really fitting in with whatever concept they may have for the song.

Once you’re past the first few tracks and the pointless “Mortality” that shows a little promise before just dropping off into silence, the remainder of the album consists of over-bloated and frankly boring songs that only match the label of progressive in terms of their length. The band has put effort into this album, that much is clear, however so much of it doesn’t seem to translate to whatever grand idea they had for this, making it sound more like an unfinished idea than a completed release.

The Spill Magazine is a Toronto-based online publication dedicated to covering the independent music scene with a strong focus on our thriving hometown talent. Our writers bring you up-to-date news, in-depth features on musicians and reviews for the latest CD releases. We also travel to the front lines for all local festivals including Canadian Music Week and North by Northeast.Don’t forget to check out our Facebook and Twitter pages for all daily Spill updates.
RELATED ARTICLES
album reviewalbum reviews
8.0