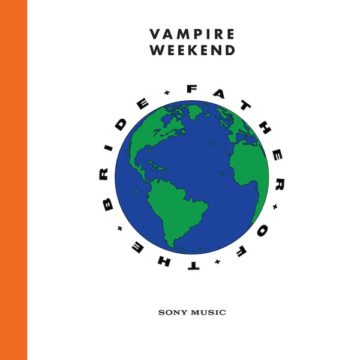 After nearly six years and the departure of multi-instrumentalist and producer Rostam Batmanglij, Vampire Weekend has released their fourth album Father of the Bride. It is a sprawling, intricate masterpiece that features some of their most unique songs to date.

As their fourth album, it feels markedly distinct from the previous three. This is partly due to the six-year gap, the change in the band’s lineup, and the way the Father of the Bride album art diverges from their previous aesthetic, yet it is the wide variety of musical styles and the experimental nature of Father of the Bride that really sets it apart. While Modern Vampires of the City had a meticulous, haunted feel, FOTB is distinctly light-hearted and breezy, the vividly colourful response to the grey complexity of their previous album.

Father of the Bride is much looser and more experimental than previous Vampire Weekend albums, which stems from its collage of influences. Contained within Father of the Bride’s 18 tracks, we hear Grateful Dead jams (“Harmony Hall”, “This Life”), prog-rock instrumental breakdowns (“Sunflower”, “Sympathy”), auto-tuned vocal riffs (“Flower Moon”, “Bambina”), samples from the The Thin Red Line film score (“Hold You Now”), and the ambient soundtrack of Japanese Muji stores (“2021”), all woven together into warm and engaging indie-pop. Fans will recognize the intelligent lyrics, catchy melodies, and the afro-pop guitar of Vampire Weekend’s early work, yet it is obvious that the band had a lot of fun exploring different styles, as they filter their distinct sound through a vast variety of genres.

Overall, Father of the Bride is an upbeat, inviting, and musically rich album. Despite the large number of tracks and the wide variety of musical influences, it feels very accessible and unified as an album, balancing complex musicality with bright melodies and the expert songwriting of frontman Ezra Koenig. It is a fantastic release from one of the most interesting and talented bands currently making music.

Kieran Davey is a freelance writer and music enthusiast from Vancouver, Canada. He particularly enjoys alternative rock, groovy hip-hop, and basically any music from the 60's. Aside from reviewing music, he also loves playing guitar and spending time in nature.
RELATED ARTICLES
album reviewalbum reviewscolumbia records
10