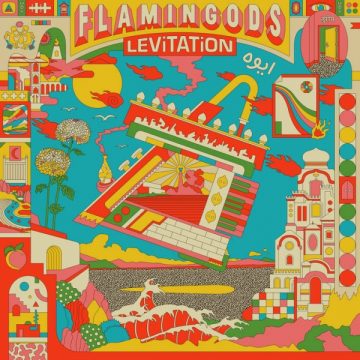 Soaring to new heights in crafting their signature sound of psychedelic exotica, self-appointed international psych explorers Flamingods have released their fourth studio album Levitation. Following their 2017 signing with Moshi Moshi and subsequent Kewali EP release, the 4-piece London-based band with roots in Bahrain is back with their next full-length album.

It’s been worth the wait. Levitation is a trip that takes its listener on a sonic journey across the world, back in time and to outer-space. From the opening track “Paradise Drive” to the title track “Levitation” closing out the album, whirling keyboard-driven basslines and weaving Eastern-inspired strings invite you into a world of possibility. The album showcases Flamingods’ signature sun-drenched psychedelia, channeling global influences to paint mystical, hopeful & positive imagery within the music and lyrics.

Their signature sound combines the nostalgia of Oasis, the grittiness of Thee Oh Sees and the pop/rock psychedelia of Tame Impala; pairing it with peyote tea & Turkish delight for a hazy, vibe that’s intrinsically tied to summertime.