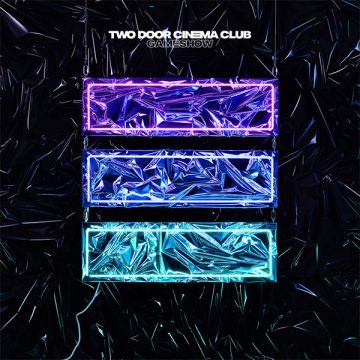 Gameshow takes the fast-paced, driven feel of Two Door Cinema Club’s first album, Tourist History, and the more laid-back and soft-spoken mood of Beacon and brings them together to create a blend of every facet of Two Door Cinema Club that we’ve heard so far. It’s even possible to pick out some of the EDM-inspired touches that originate from Changing of the Seasons, such as the synth lines and distorted melodic accents in the track “Ordinary.” In all respects, Gameshow is an homage to the musical path Two Door Cinema Club has taken.

The result of this is a very cool, confident, and groovy sound that isn’t quite as loose or berserk as Tourist History was, but still displays an appropriate amount of brightness that could be comparable. It’s as if Two Door Cinema Club has reigned itself in a bit; the band knows how exactly to make that sound work for it, but it also knows not to go overboard so as to not overwhelm the listener.

However, that isn’t to say that Gameshow doesn’t bring completely new elements to the table. For example, throughout the record we see Two Door Cinema Club exploring elements of harder Rock, which can be easily seen in the title track, “Gameshow.” The choices in chord structure and the dirtier, more distorted guitar and synth tones show the band’s willingness to step into a direction of berserk that’s actually different from the brand of “loose cannon” displayed in Tourist History, all the while still maintaining the same confidence and grooviness that can be seen throughout the rest of the album.

Besides the title track, Gameshow also sees Two Door Cinema Club exploring some other different genres and moods in some of its other tracks as well. Namely, “Bad Decisions” takes a couple notes from Funk; “Surgery” is a very electronically-oriented piece that one could even say is comparable to Daft Punk; and the closing track, “Je Viens De La,” is extremely disco-inspired. Just like “Gameshow,” though, all of these genre-bending songs all still carry the same overarching sense of swagger.

Because of all the variations in mood throughout the album, we see several different levels of expression from vocalist Alex Trimble to match. Specifically, while he does opt to sing in his signature airy and soft persona at times, Gameshow also sees him putting a lot more fire into his voice (which also comes through pretty obviously in the track “Gameshow”). On top of that, Trimble goes into his falsetto at multiple points throughout the album, such as in “Bad Decisions,” “Surgery,” and “Je Viens De La.” While the falsetto is executed to varying degrees of success, it is interesting and refreshing to see the different creative choices that are being made with the vocal.

Two Door Cinema Club’s Gameshow is an effort that takes all of its distinct sounds from all its past works, puts them together, and augments them, all while managing to create an image that is unique only to itself. It is a record full of character and energy that very clearly puts forward the band’s vision and successfully conveys it to the listener. Whether you’re more a fan of Tourist History, or more a fan of Beacon, or even if you’re just listening to Two Door Cinema Club for the first time, it’ll be difficult to find something in Gameshow that doesn’t appeal to you.

Kysan Kwan hails from Ajax, but is currently in the Music Business program at Berklee College of Music in Boston, Massachusetts. His love for music started in high school, where he went through his "rebellious teen alt-rock" phase before becoming open to all genres of music from EDM to smooth jazz. Kysan also is an enthusiastic concert photographer and has his own college radio show, where he seeks to introduce the American public to the best of Canadian indie.
RELATED ARTICLES
album reviewsparlophone records
8.0