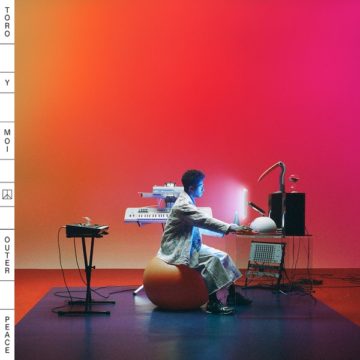 Since the release of his full-length debut, Causers of This, under the alias of Toro y Moi, Chaz Bundick has forged a career on bridging the gap between the progression of modern, radio-friendly dance music and the deeper expressions of psychedelic rock and jazz. With his rise to prominence, he has become a frequent collaborator with a variety of artists across genres that include trap, hip-hop, and ambient. It should come as no surprise, then, that his recently released Outer Peace carries on this tradition of blending sophisticated melodic and textural layering with an easily digestible sound, built on a foundation of rhythms that borrow from contemporary mainstream radio.

Most notably, trap music’s rhythmic influence in American pop music is deeply reflected in the album’s composition. Melded fairly well with Bundick’s typically funk-influenced bass lines and dreamy soundscapes, tracks such as “50-50” and “Miss Me” breathe new life into the genre. Yet at times it seems that his bid for a more mainstream appeal comes with at least a slight compromise of his own musical expression. Some songs, like “Monte Carlo”, add very little to the overall album while taking up space that could have been used to explore and experiment with other vibes.

It’s not the only disappointing aspect of the album either. The flow and progression between songs is inconsistent to say the least, often feeling abrupt and rushed without leaving any time to really digest the music. Again, Bundick’s focus seems geared toward the quick satisfaction that electronic dance music provides, rather than an immersive musical experience. Its run time of thirty-one minutes certainly contrasts with previous efforts such as Anything in Return, which more capably balances catchy, groovy beats with a spacey and transcendental atmosphere across fifty-three minutes.

Ultimately, the album is a successful continuation of Toro y Moi’s artistry. It certainly offers a lot to fans of his sound while exploring new territory that is accessible for less avid listeners. Furthermore, his style of subtly layering textures and building ambience behind all the funkiness is as effective as ever. Yet the impression that Bundick could have put more effort into writing the album is somewhat inescapable, particularly after recent demonstrations of his capabilities on works such as his collaboration with the Mattson 2 jazz duo. It is satisfying, but with Toro y Moi’s reputation and history, one expects more than simple satisfaction.

Based in Montreal but raised across Western Europe, Andrew feels at home both everywhere and nowhere. Having picked up the piano at age four, he has since gone on to add clarinet, saxophone and guitar to his musical arsenal. As well as crafting music, Andrew spends a lot of time listening both at home and in live contexts. Rather than focusing on a particular style or calibre of artist, he is keen to explore music of any shape or size. Outside music, Andrew's passions lie in philosophical writing, visual art and sharing positivity with the world around him.
RELATED ARTICLES
album reviewalbum reviewscarpark records
8.0