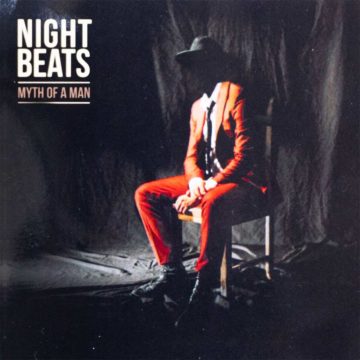 Seattle’s Night Beats have recently released their fourth album, Myth of a Man. It was recorded by founding member Danny Billingsley and produced by Dan Auerbach of The Black Keys. While it was mostly an effort from Billingsley and a backing band of seasoned veterans who had worked with Elvis Presley and Aretha Franklin, it is apparent that Auerbach played a significant role in shaping the sound. A laid-back R&B dive into psychedelia, it has a good vibe, but is not without issues. Though there are some legitimately charming moments, they are not frequent enough to keep listeners consistently engaged, and certainly not sufficient to make the album outstanding.

Many of the non-single tracks stand out more than the singles. The first single, “Her Cold Cold Heart”, is pretty, has a nice groove, and wears its influences on its sleeve. The debt Billingsley owes to bands like Love, Cream, and The 13th Floor Elevators is obvious, which isn’t at all a bad thing; in fact, it is one of the album’s strongest qualities. However, all of this material is filtered through the poppy blues sound of Auerbach’s recent work with The Black Keys, which was fun for a while, but has been worn out by now. The track “One Thing” in particular sounds like a B-side from a Turn Blue single. In conclusion, Myth of a Man is a nice album with great ideas, but it doesn’t quite explore those enough.

Hello! I’m Cody McIntosh! I’m a lifelong music fan, blogger, student, writer, and musician, and guitar teacher. I’ve been playing and listening for over half of my life now and I don’t intend on stopping anytime soon. Some of my favorite genres are 80’s New Wave and Post-punk, Hardcore, Jazz, Garage Rock, and IDM. You can find me at a few places online, but below are the main few.
RELATED ARTICLES
album reviewalbum reviewsheavenly recordings
9.0