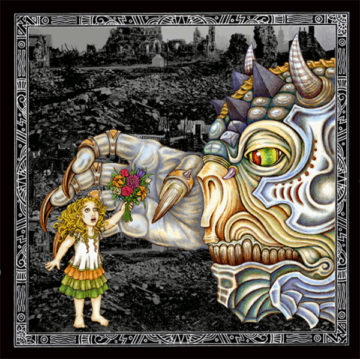 Tony Malone was part of the original Queen Street punk scene in the late 1970s. At that time he was a member of The Dishes, after which he formed Drastic Measures. Malone wrote some of the finest pop/new wave songs of the time and Drastic Measures’ self-titled album is a classic, but after that, there was relative silence. A compilation album and a new band (Basketcase) surfaced in the 1990s, but more silence followed. Flowers for Armageddon—Malone’s first album of new material since Basketcase’s You People Are Sick, released in 1995—is a fresh new approach to pop and avant garde.

A concept album of sorts about an individual waking to witness the end of the world, Flowers for Armageddon is an incredible listening experience. Though not exactly light fare, Malone’s friendly manner allows the listener to be happily sucked into his alternate universe. Malone approaches songs as if they were miniature operas, not in style but in form. He uses repetition as an instrument (especially in songs such as “Run Joni Run”). Listeners will find themselves bouncing along to infectious melodies and beats, despite the darkness of the lyrics.

In some ways, this is Malone’s White Album; it is full of different sounds, music, and genres, and “Armageddon” could even be described as the album’s “Revolution 9”. The joy of this album comes from its many surprises, including the hidden tracks at the end, which are well worth the wait.

Malone plays most of the instruments and loops, but he is aided here and there by past collaborators, including Michael Ursini of Uforia and Alec Pulec, among others. However, this is Malone’s vision in every aspect, including the brilliant cover art, and it all comes together remarkably well.

Flowers for Armageddon is a long-overdue reminder of Malone’s genius, and it is somewhat disheartening to think that his voice has been absent for so long. Though he has produced and collaborated on other artists’ albums, he always leaves the audience wanting more. Considering the ominous title, I hope that this is not Malone’s goodbye, but rather the beginning of a new chapter.

Born and raised in Whitby, Aaron discovered music through his love of The Beatles. This led to a career in radio, writing for various publications, and ultimately a radio show about The Beatles (Beatles Universe), which ran for over four years. When not immersed in music, Aaron enjoys spending time with the loves of his life -- his wife Andrea, and daughters Emily and Linda (all of whom have an intense love of music too).
RELATED ARTICLES
album reviewalbum reviewstony malone
8.0