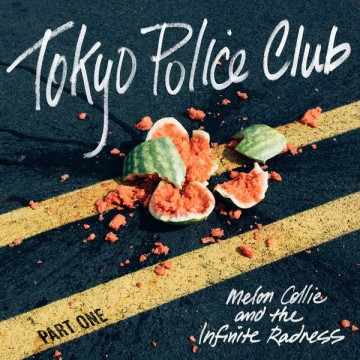 Tokyo Police Club have just released their latest album Melon Collie and the Infinite Radness, Pt. 1, after the suitably subtle success of their Argentina trilogy previously with the LP Forcefield (2014). They have been a solid part of 2000’s  Canadian Indie Pop / Alt Rock Scene and have toured with such acts as Weezer, Angels and Airwaves, and Foster the People. These Newmarket Canucks have found their comfortable following in the musical niche containing modern acts such as  Passion Pit, Metric, Bombay Bicycle Club and Two Door Cinema Club.

These Pop-Rock busy bees have put out the 2016 album after the single release of “Not My Girl.” After their more rhythmic progressive stylings of the previous album, this LP is one a Tokyo Police Club fan would expect from the autonomous Indie group. This song’s upbeat melodies are accompanied by a classic carefree pop “OOAH OH” all amongst a tinge of twangy guitar strums leading to an all-embracing composition.  David Monks’ soft-spoken boyish vocals keep a steady pace with a chorus that hums “time doesn’t mean much to me if you’re not my girl…” A bubble gum ballad that speaks to our inner girly high school tween. All leading to a peak of a partially distorted scream that periodically chants “not my girl.” Next a slightly slower “PCH” has an enjoyable lighter presence in Tokyo Police Club’s dependable Indie fashion that fans will welcome. Track three, “The Ocean,” is a sappier song somewhere between Weezer and those guilty pleasure emo bands with the post punk palm mute (you remember). About halfway through it picks up with a more experimental electronic sound heard in some of their earlier work like “Bambi.”  With stand out lines like “I’ve had a little to much to drink” and “I’m Standing still,” which tell a story of what seems to be an encounter at a party with a significant person, sung by the narrator.

“Losing You” follows with a steady head bobbing sing-a-long that Tokyo Police Club knows how to produce. They achieve a very accurate overall representation of themselves as a band on this LP. A series of shorter sweet ditties each have a slightly different manner about them playing around with a variation of pace and tone. It concludes with “Please Don’t Let Me Down,” which is inevitably comparable to the sound of The Strokes (whose sound has helped shape the genre as well as the band). Tokyo Police Club has even covered the band on an earlier album. This track is particularly pleasant because the listener can pick out each band member’s instruments easily, whether it’s the higher wail of Josh Hook’s guitar riffs mingling with David Monks’ insentient untarnished vocals, or the crashing snares and cymbals of Greg Alsop mixed with Graham Wright’s poppy synthesizer melody thrown into the bunch. Overall it is clearly a Tokyo Police Club album and satisfies that Indie Pop itch. Admirers of the band wont be disappointed by Melon Collie and the Infinite Radness, Pt. 1. For those who just want a new, simple, happy-go-lucky listen one can appreciate its humble sound.