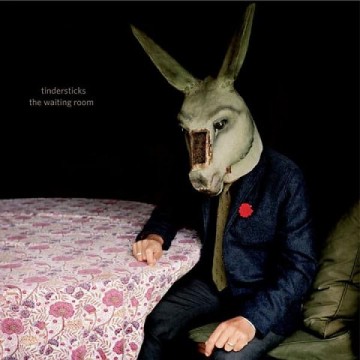 Ambient music is risky business. The genre’s key players tend to find themselves stuffed into film soundtracks or humbly playing in the low recesses of a dinner party. Tindersticks, however, find a medium setting to low tones with The Waiting Room – a stark, confident 11th record that offers up 11 carefully crafted tracks.

Perhaps the band’s experience is what makes The Waiting Room sound miles above its categorically comparative pals. No matter what the reason may be, this album feels complete in every sense of the word. The record does not demand full attention from its listeners, but instead captures it effortlessly with soulful, jazzy rhythms cast adrift through delicate production. All of this is complemented by the wavy, yet not ambivalent, vocals of Stuart Staples. Here, his croon is burrowed in audio effects that would typically take away from the overall delivery of tracks like “Second Chance Man,” but are wonderfully used to elevate that ambient hum in a vein similar to that of Thom Yorke. The real treat of this vocal compression, though, is how well it compliments the instruments. It’s almost as if the lead singer of the band is both the bass and the horn section. This is epitomized with “Help Yourself” and “Were We Once Lovers?,” the latter showcasing lyrical tightness with “How can I care if it’s the caring that’s killing me?.” Amidst all the not-so-quiet quietness, it is the instrumental “Planting Holes” that steals the show. Rarely does an instrumental track stand out as this does. In its simple piano melody, the song evokes the most imagery and emotion, inspiring thoughts of a rainy night. It’s the kind of song that can change the temperature of your skin when you immerse yourself in it.

That’s not to say there aren’t missed opportunities in The Waiting Room. The real undoing comes from “We Are Dreamers!,” which is the only track feeling somewhat uninspired. The blip, though, is not large enough to throw Tindersticks off balance. They recover gently on the record’s final act with “Like Only Lovers Can.” The expertise here couldn’t be hidden if they tried. And while it’s clear this sort of fare is an acquired taste, there is something deep and brooding in The Waiting Room that is memorable enough to beg further discovery.

Robert Defina is an avid critic both on paper and in person. He spends more time writing album reviews than he does worrying about his future. He hopes that this sort of procrastination never grows old.
RELATED ARTICLES
album reviewscity slangthe waiting room
9.0