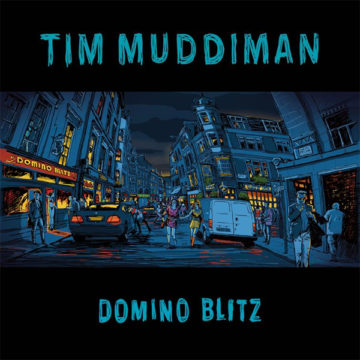 In many ways, this is what Woody Guthrie would have sounded like if he was young and alive today. That is not to say that Domino Blitz is folk, or even close to the sound of Guthrie, but the sentiment is there. Tim Muddiman And The Strange have written and produced an album that shouts out for the working class. This album stands up for the people who do not seem to have a voice. Musically, it is a dark, and guitar driven rock with a tinge of electro. And the Muddiman does an excellent job in having the music reflect the sentiment of the lyrics.

This is Muddiman’s second album, following 2016’s Paradise Runs Deeper. He has learned a great deal playing with Gary Numan and as a member of Pop Will Eat Itself, yet his solo music does not sound like either band with whom he plays. He has his own distinct style and his own sound.

The songs are melodic and extremely well produced, but they are jarring, at times. He keeps you on your toes by throwing in sounds and odd beat structures. For example,  the sound of pinball introduces one of the highlights on the album, “Rat Ballads”. With the use of sound effects, he manages to create the atmosphere of an indifferent audience in a small club. With the lyrics, it is sheer brilliance. It is as if he is concerned that his message is being ignored.

While the lyrics can at times be dark, there is an overall sense of hope and he encourages his listener to stand up and be counted. In many regards, it is an angry, hopeful, and at time amusing album.

The album has a retro feel without being regressive. He manages to mix retro with current and it works, much like Nick Cave or even Tom Waits. How many albums being released in 2018 reference Clark Gable (the song “Clark Gable”)? Clearly Muddiman does his own thing and is not too concerned with pandering to today’s youth. They may dig the music, but this is not an album marketed at a teen audience.

Muddiman has made an impressive album. He continues to demonstrate growth and to write intelligent rock songs. Domino Blitz is a great album.

Born and raised in Whitby, Aaron discovered music through his love of The Beatles. This led to a career in radio, writing for various publications, and ultimately a radio show about The Beatles (Beatles Universe), which ran for over four years. When not immersed in music, Aaron enjoys spending time with the loves of his life -- his wife Andrea, and daughters Emily and Linda (all of whom have an intense love of music too).
RELATED ARTICLES
album reviewsdomino blitzgary numan
8.0