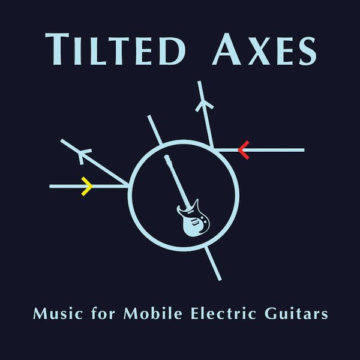 Tilted Axes is the project of Patrick Grant, a composer and performer living in New York City and creating music for a wide range of media. A native of Detroit, MI, Grant moved to NYC in the mid ‘80s where he studied at the Juilliard School, worked on the production team for composer John Cage, and produced his first recordings at the studios of Philip Glass. He spearheaded the compositional element of an international project for the Millennium, which had him working with Billy Joel and Quincy Jones. However, regardless of the resumé Grant fails to make music that is enjoyable for a normal listener’s ear.

The latest album, Music For Mobile Electric Guitars, is music made by a guitarist, for himself and a few other guitarists. The album is basically just 17 different five-minute guitar solos. Grant has turned the band into a bit of a traveling, busking scenario where he travels to different cities, reaches out to local guitarists and they walk around town playing the songs. As interesting and fun as that might be to see on the street, it doesn’t translate well to an album. Throughout the 85 minutes of this work guitars screech, scream and wail through about 95% of it. How anyone that is not a guitar snob is supposed to listen to this, I’m not sure. Grant describes the project as, “musical pathways through the urban landscape, turning neighbourhoods into sonic narratives. As a form of street theatre, the ensemble brings potent, ecstatic riffs, and an element of surprise, to an unsuspecting public. Tilted Axes is always in motion; striding in, rocking out, and moving on.” In my opinion, for recorded music sake, Grant should definitely move on. The only song I can make it all the way through is “Harmonic Revolutions,” where Grant seems to have taken three minutes to relax a little bit. The song uses some eerie and daunting harmonics to make a sort of sleepy lullaby.

It’s totally fine to do things like this on the street or at some points during some songs throughout an album. However, making an entire album of guitar solos isn’t really listenable, let alone a market to sell. Obviously, Grant is talented, but sometimes talent and education ruin the creativity. Music takes patience and many times, doing less is more. Nobody thinks Will Champion (Coldplay) is the best drummer around or Dave Keuning (The Killers) is a virtuoso guitarist, but they don’t need to be. Bands that succeed and that people love are because the individual members do what is best for the song and the band as a whole. It’s not a competition. The only people who care about an insane drum fill are the four drummers in the crowd. A band makes great music because they work together to make one cohesive, incredible work of art.