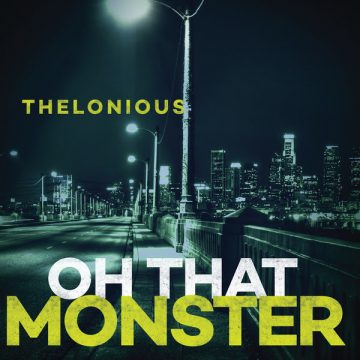 16 years ago, Thelonious Monster released their last album, California Clam Chowder, a collection of interpretations, but not quite covers, from some of the most iconic artists ever. Now, the alt rock pioneers from the days of Jane’s Addiction are back with their first record since 2004, Oh That Monster.

Hitting listeners with a thick wall of distorted chords and dissonant licks, Oh That Monster opens with “Disappear”, a track that is further elevated by Bob Forrest’s thin, high vocals reminiscent of a young Perry Farrell. The punk rock energy is then coupled with the laid back, near surf rock vibe of the following tracks, “Falling Behind”. Like an alternative Bob Dylan, Forrest laments on the struggles facing middle class America in 2020 set to a pure vintage California vibe.

While much of the rest of Oh That Monster sounds reminiscent of a series of Elvis Costello B-sides, there are a handful of moments that truly shine bright and speak to the artistry of the band and their legacy as innovators. The first comes in the frantic shape of “Teenage Wasteland” with its brass accents and up-tempo pace. The next follows immediately after on the dark, gritty, and emotionally driven “Sixteen Angels” – a track that very well may be the strongest on the album. The atmospheric and moody track feels as if it is playing live from the corner of a seedy afterhours club in Los Angeles. It is simply captivating. Finally, the Bowie inspired funk rock of “LA Divorce” gives Oh That Monster a solid shot of invigoration and infectious excitement.

Without reinventing the wheel, Thelonious Monster return with an underground Los Angeles take on ‘80s new wave music with just enough of an alternative rock twist to remain distinct to their back catalogue. Unfortunately, however, Oh That Monster falls victim to the natural hype generated by any return that is 16 years in the making. With the exception of Tool, few artists could create an album to topple such a wave. While Oh That Monster falls short of triumphant and closer to good, it still carries a sense of excitement and, hopefully, Thelonious Monster will be back much sooner with the follow-up.

A passion for music has always been a part of Gerrod’s life. As a young boy, he was raised on a steady diet of the music from The Chili Peppers, Aerosmith, The Stones, Prince, and others from his mum. Raised in the GTA, Gerrod continued to foster his love for music by attending a wide range of concerts and learning the drums. His unapologetic passion for music has no bounds and has spread to a wide variety of styles, whether it be the 90’s rock that sound tracked his teenage years, the jazz he studied in university, or his newfound love for hip-hop. He recently received his bachelors in music and education from York University and is passionate about writing and reviewing good (and less than good) music. Gerrod is also the drummer and songwriter for a Toronto based rock & roll band, One In The Chamber.
RELATED ARTICLES
album reviewalbum reviewsdisappear
8.0