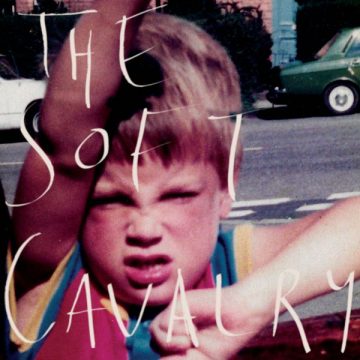 It’s not very often that a debut album comes along that upon first listen, you know it is destined for greatness. Meet The Soft Cavalry. This is one album that has such an effect upon the first listen, it has to be repeated immediately and then for a third time just to make sure what was heard the first few times wasn’t a hallucination. The band is comprised of Steve Clarke (former Slowdive tour manager and musician for many bands, more recently David Brent’s Foregone Conclusions) and Rachel Goswell (of Slowdive, Mojave 3, Minor Victories and solo fame), who are also husband and wife.

Steve is the main songwriter for this set of a dozen songs comprising their debut. His influences have to be so vast as well as close to home. Ranging from harder edged shoegaze to symphonic, easy listening style pieces, the album literally has something for almost everyone. Some songs sound tailor-made for popular radio, and others sound like they need a film to accompany them.

Lead single, “Dive”, gently introduces us into their world. Sweeping phrases and the angelic harmonization make this a perfect initiation. “Bulletproof” was the second single and video (which has Rachel sweetly signing the words in British Sign Language as opposed to Sign Supported English, because it offers a translation of the song’s meaning versus a literal word for word signing of the lyrics — which doesn’t make sense to people like Rachel’s son who is completely deaf). Perhaps the most radio friendly track, as well as the latest single “Never Be Without You” provides you with some sing-along, head-bobbing grooves that will no doubt be cranked up loud on many car stereos.

There is so much more than just the singles to love about this album. “Careless Sun” is a deceptive and fun romp that goes from a gentle mood provided by strings to a blissed-out finale akin to the ending of the Beatles “A Day in the Life”. “The Light That Shines on Everyone” is an acoustic ballad that makes smart use of mellotron and harpsichord. Album closer, “The Ever Turning Wheel” will have you drift to the final notes aching for more.

An early contender for “Album of the Year”, this duo proves to be more than simply where they have been. Hopefully, this is a project that will continue. Steve’s talent for writing along with the harmonies they lay out (to make no mention of the lyrical content which is another article in itself), and the immaculate instrumentation and production make this such an amazing auditory journey.

Michael Mitchell's love of music started at an early age and slowly became an addiction that courses through his veins to this very day. It is guaranteed that if you are in his proximity, he will try to get you to travel to the nearest record store and make you buy beyond your means. His wife and two children acknowledge his problem and continue to encourage him into rehab. He currently writes for Torched, Stereo Embers, God is in the TV, ReGen and Spill magazines.
RELATED ARTICLES
album reviewalbum reviewsbella union
9.0