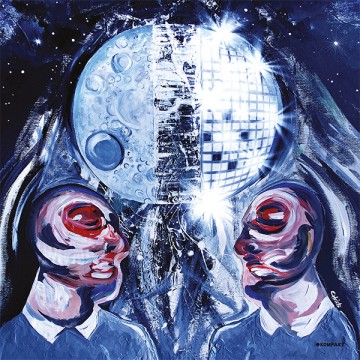 The British ambient synth duo of Alex Paterson and Thomas Fehlmann describe their latest release as based on the idea that mankind discovers its roots, as interpreted through musical harmonies, on the ancient rocks of solar moons (presumably in 2703 AD). Well for those unfamiliar with The Orb’s acid house background, Moonbuilding 2703 AD can certainly sound way out there.

With only six tracks on the album and still boasting more than an hour of music, you might think each song would feel as long as it would take to travel to one of those solar moons. However, the mix of swirly, ghostly melodies and rhythms make the journey move faster than expected.

The opening track “God’s Mirrorball” presents us with The Orb’s sense of humour and playful nature, stating that “If you believe in evil, then you probably need a whack on the back of the neck with a big fucking stick.” What follows is a spirited blending of driving beats, floating between ethereal modulations, techno grooves, and funky dance movements.

Much of the album follows the same formula, apart from “Lunar Caves,” which can only be described as experimental electronica.

The Orb wants their music to take you to far away and distant worlds and generally they do . . . just remember to bring your weed and dancing shoes.

An educator who also tries to introduce others to great music. It's a never ending job.
RELATED ARTICLES
album reviewskompaktthe orb
8.0