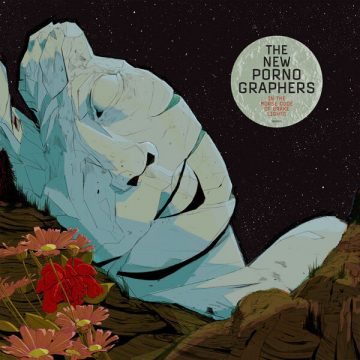 Long-time purveyors of hook-filled, harmony-layered alternative jams, The New Pornographers celebrate their 22nd year in the music business with the release of the poetically titled In the Morse Code of Brake Lights.

The cliché genre-descriptor often attached to the band of ‘powerpop’ is an unfortunate one and does them little justice – they are in reality designers of an incredibly sonically dense landscape.All eight members contribute to most of their songs, with some of the best harmonies you’re likely ever to hear. Such is their success in that particular field – most notably but not limited to the symbiotic vocal balance between Neko Case and Carl Newman – that it is easy to overlook both their prolific talent and the fact that the band have no clear lead singer.

In the Morse Code of Brake Lights feels like a bit of a step back in time, although it features all of the hallmarks of the band’s past offerings and distinguishing characteristics. There is an unmistakable feel of the early 2000s, when the band was just finding its feet and polishing its sound. Perhaps it’s a trick in production, or a particular recording filter, but there are many moments that seem inspired by the band’s albums Electric Version (2003) and Twin Cinema(2005). Both “The Surprise Knock” and “Colossus of Rhodes” in particular feel as if they were structured on the same propulsive and key-friendly sonic landscape as those two albums.

While there are more than a few nods to their past, there are also many examples of the band’s mature production nous, with the stunningly layered “Dreamlike and On the Rush” as the clearest example. All the vocal highlights remain, but there is so much going on underneath it all that it’s sometimes hard to isolate just how many layers there are.

Two more tracks deserve special mention. The obvious use of the word ‘fuck’ in “Higher Beams” is decidedly out of character. Equally so is the stripped-back, almost vocals-only “You Won’t Need Those Where You’re Going.”

It doesn’t seem to be possible for The New Pornographers to make an album that qualifies as anything less than good and they have carried on that trend again. On In the Morse Code of Brake Lights, they show that they are just as adept at sonically stretching out in the direction of their past as into their possible future.

Here's what we think...
Spill Rating
Fan Rating
Rate Here
New Criteria
10
7.8
8.0
Total Spill Rating
7.8
Total Fan Rating
3 ratings
You have rated this
Album Reviews
album reviewalbum reviewsconcord recordsfalling down the stairs of your smilein the morse code of brake lightsthe new pornographers
album review, album reviews, concord records, falling down the stairs of your smile, in the morse code of brake lights, the new pornographers
About the Author
Br.

Br. lives in southern Ontario, grew up on The Beatles and The Journeymen, spent his adolescence immersed in grunge, and his adulthood in British alternative. His greatest joy is seeing his son dance and grow into his own appreciation of the indescribable joy of music...
RELATED ARTICLES
album reviewalbum reviewsconcord records
9.0