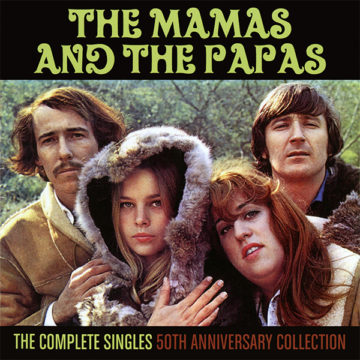 The Mamas and The Papas were a sensation in the 1960s, scoring 11 top forty singles, seven of which went into the top ten, and of course their sole number one, “Monday, Monday”. The band released five albums between 1966 and 1971. While there have been a number of compilations, this one is very different. Different because Aaron Kannowski has worked very hard to track down the original mono masters of these classic singles. This was no easy task, as a great many original tapes have disappeared over the years, and Kannowski had to track down the masters and he has done an excellent job.

This set was originally released in 2016 on CD, but the fine folks at Real Gone Music have restored these songs to vinyl, in glorious mono. Quite frankly, they have never sounded better. The Complete Singles brings together all of their single releases into one volume, both sides of each single to be exact. These are the original single, mono masters. Does it make a difference? Of course. I have the original single of “Monday, Monday” and have been searching for that sound ever since. On this release, it is there, the original mono version.

The Mamas and The Papas were four very talented individuals: John Phillips; Denny Doherty, Cass Elliot; and Michelle Phillips. John Phillips did the majority of writing and he was able to incorporate folk and blues into their pop music. The four voices blended magnificently over some incredible musicianship by some of the most talented session players in L.A. at the time.

The end result is some pretty fine pop music from a definite era. The songs, for the most part, hold up well, but some are dated, as they should be. The Mamas and The Papas released some brilliant singles, but not all of their B-sides were stellar. In fact, some of the songs feel more like filler (“Shooting Star” comes to mind).  Overall, this compilation is a little uneven.

But even the lesser known songs are fun to hear, and for some it might be the first time hearing them. The Complete Singles is a very good compilation album. It gives an excellent overview of a very talented band. It is also a nice snapshot of time, the late 1960s and those times. The original mixes sound great. This is a well put together set that fans will love and maybe earn the band some new, younger fans.

Born and raised in Whitby, Aaron discovered music through his love of The Beatles. This led to a career in radio, writing for various publications, and ultimately a radio show about The Beatles (Beatles Universe), which ran for over four years. When not immersed in music, Aaron enjoys spending time with the loves of his life -- his wife Andrea, and daughters Emily and Linda (all of whom have an intense love of music too).
RELATED ARTICLES
album reviewalbum reviewsreal gone music
10