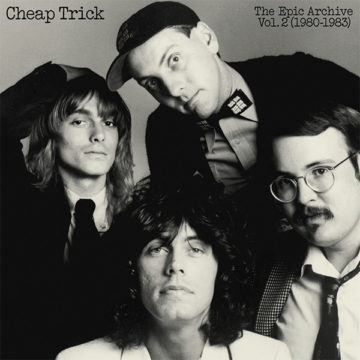 Although Cheap Trick has had numerous hit singles and albums, I still think that it is unjustly overlooked. This is a shame, as it is one of the most original bands to emerge from the U.S. in the last 40 years. The Epic Archive Vol. 2 (1980 – 1983), originally released in 2015 as a download, tried to collect all of their non-album songs from 1980 to 1983 to have them all in one convenient package. The title says it all, actually. For the most part the record company did a very good job. This release is that compilation on CD and  vinyl.

This is very close to being a ‘greatest hits’ compilation. Several of the songs were top forty hits (“Day Tripper (Live)”, “Everything Works Out If You Let It”) and others were on top selling soundtrack albums (“Spring Break” from Spring Break and “Reach Out” from Heavy Metal). The songs on this album are excellent. There are a couple of demos (“If You Want My Love” is fantastic in demo form) and  single edits. Fans will be happy to gather all of these odds and ends from various albums and singles onto one well put together and fantastic sounding album.

All of these songs need to be on this collection. The “Super New Dance Remix” of “Saturday At Midnight” is probably the least interesting song on the collection, but the other ones more than make up for it. The live tracks, many from their classic 1980 EP Found All The Parts are great to hear again, but the live songs from the L.A. Forum (from 1983) are especially brilliant. Give “Way Of The World” a spin, it sounds as good as, if not better, than the studio version.

There are several treats throughout this album, including the single edit of Cheap Trick covering The Motors’ (“Dancing The Night Away”), which is pure magic.  There really are no throwaway songs on this collection.

The Epic Archive Vol. 2 (1980 – 1983) stands as an excellent example of how a number of songs can be collected into one compilation (there are two other volumes available). It is well thought out and quite thorough.

Born and raised in Whitby, Aaron discovered music through his love of The Beatles. This led to a career in radio, writing for various publications, and ultimately a radio show about The Beatles (Beatles Universe), which ran for over four years. When not immersed in music, Aaron enjoys spending time with the loves of his life -- his wife Andrea, and daughters Emily and Linda (all of whom have an intense love of music too).
RELATED ARTICLES
album reviewalbum reviewscheap trick
7.0