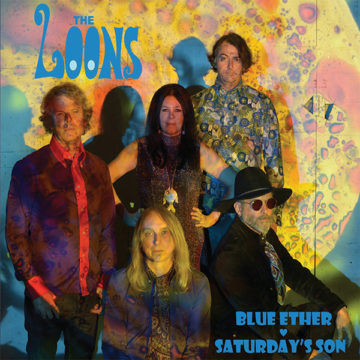 Celebrating being together for twenty years — fifteen of which with the same lineup — The Loons has released their latest single. Much like the vintage rock vibe that the band emulates, this is a double-sided single. Like any 45, it has two songs, the first being “Blue Ether,” followed by “Saturday’s Son.” Over the course of their career, the California-based band has released four full-length albums, more than a handful of singles, and has toured across the globe. Blue Ether b/w Saturday’s Son acts as a short but very sweet return for the band.

“Blue Ether” opens like a film as the sun rises over the desert, a band of outlaws (wasted and stoned) stumbles through a desolate path after a night of debauchery and hedonism. The song has a sense of darkness and mystery to it through the fuzzy guitars of Marc Schroeder and Chris Marsteller that weave in and out of one another with Mike Stax’s vocals howling over top in a manner that is both charming and sinister. Reminiscent of ’70s desert rock of The Doors and early Stones, it is nothing short of spectacular. This is a song that will immediately make the listener into a fan of The Loons.

On the flip side, The Loons has recorded a cover of “Saturday’s Son.” Originally by Sons Of Adam, the track has been a consistent part of the band’s live set. After hearing the track, their choice to cover “Saturday’s Son” feels incredibly natural, as the song sounds distinctly of The Loons. Less chaotic than “Blue Ether,” the song links The Loons to the likes of The Clash and serves as an excellent bonus to their recorded collection.

“Blue Ether” b/w “Saturday’s Son” is an excellent single that is equally as exciting as it is entertaining. While only two songs in length, this single is a must-hear and will have you hooked on The Loons.

A passion for music has always been a part of Gerrod’s life. As a young boy, he was raised on a steady diet of the music from The Chili Peppers, Aerosmith, The Stones, Prince, and others from his mum. Raised in the GTA, Gerrod continued to foster his love for music by attending a wide range of concerts and learning the drums. His unapologetic passion for music has no bounds and has spread to a wide variety of styles, whether it be the 90’s rock that sound tracked his teenage years, the jazz he studied in university, or his newfound love for hip-hop. He recently received his bachelors in music and education from York University and is passionate about writing and reviewing good (and less than good) music. Gerrod is also the drummer and songwriter for a Toronto based rock & roll band, One In The Chamber.
RELATED ARTICLES
album reviewsblue etherthe loons
8.0