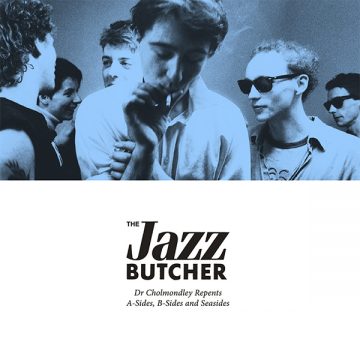 This is not an easy review to write. Sadly, Pat Fish, also known as The Jazz Butcher, passed away on October 5, 2021. Born Patrick Guy Sibley Huntrods, he was the lead vocalist and main writer. He formed the band with Max Eider in 1982, and their debut album, Bath Of Bacon, was released in 1983. They would go on to release a total of 13 studio albums and three live albums, along with numerous singles.

The Jazz Butcher had its own distinct sound – hard driving pop, with all sorts of extra bits thrown in to keep things interesting. Then there were his introspective, personal and downright fantastic lyrics. He could sing about his own struggles, then turn around and write a fantastic song about Peter Lorre. A true genius.

This new box set, Dr Cholmondley Repents: A-Sides, B-Sides and Seasides, was compiled by Fish, and is the third in a series of box sets reissuing The Jazz Butcher catalogue. The Wasted Years and The Violent Years were the first two box sets that collected all of their albums up to their 1990 album Condition Blue. This one collects A-sides, B-sides, 12 mixes and various tracks not available on those albums. As a bonus, there is a live radio broadcast recorded for KCRW in Los Angeles.

Although The Jazz Butcher is regarded as an ‘album’ band, it is actually quite a good ‘singles’ band as well. The issue, in Canada, is that several of their singles have been collected on various collections, giving the illusion that they existed in the ‘album’ world, whereas the rest of the world were treated to fantastic singles and equally wonderful extended versions. Their B-sides were always adventurous and a great deal of fun. Pat Fish and company never took themselves entirely seriously and managed to mix very emotional songs with songs that one could not help but have a little a laugh.

Fans of The Jazz Butcher will know, if not own, a great deal of this set. However, it is quite convenient to have all the songs collected in one place. But it is the extended remix versions of the band’s classic songs that will entice fans to purchase this set. “Real Men (12” Version)” or “Girl Go (12” Version)” are just two examples where these great songs were actually enhanced in the extended version. But there are plenty of B-sides that have not appeared on any album, in Canada or elsewhere. “The Jazz Butcher Meets The Prime Minister” is a great deal of rocking fun, while “The Hairbrush And The Tank” is as odd as the title would indicate. Plus songs that have only been available on various artists’ compilations are welcome additions and add another dimension to The Butcher. Give “City Of Night” a listen, which had only been available on Glass Records compilation. Channeling French pop with ease, it is a work of art and a lost gem.

As for the live disc, The Jazz Butcher has always known to put on dynamic shows. Having seen them live several times, they never disappointed. While this is not a ‘live’ disc in front of an audience (they released such albums during their career), it is The Jazz Butcher live, albeit on radio. The quality is quite good, and the musicianship is, as always, fantastic. Fish always liked to incorporate older songs into his own creation, and this is done beautifully with a cover of Roy Orbison’s “In Dreams” segues into “Angels”. Since the performance was recorded in 1989, much of the material performed comes from Big Planet, Scary Planet and 1990’s Cult Of The Basement. Although now some of the older, classic Jazz Butcher songs are here, it is still a great addition to all the studio work contained in the box set,  and it reminds people of just how great The Jazz Butcher was live.

When Pat Fish was assembling Dr Cholmondley Repents: A-Sides, B-Sides and Seasides, he did not think it would become a tribute to him and the band, but sadly, that is what it has become. The world lost him, and his genius, and this set reminds just how much of a genius he was. After The Jazz Butcher moniker was put to sleep, he moved on to bands such as Sumosonic and Wilson. While not achieving the success of The Jazz Butcher, he did release some wonderful music through those vehicles. He also performed solo shows, especially in the last year on the internet, live from Fish Mansions. As for The Jazz Butcher, this set does an excellent job of rounding up some top notch post punk pop music that continues to be relevant and potent. Pat Fish and The Jazz Butcher will be truly missed.

Born and raised in Whitby, Aaron discovered music through his love of The Beatles. This led to a career in radio, writing for various publications, and ultimately a radio show about The Beatles (Beatles Universe), which ran for over four years. When not immersed in music, Aaron enjoys spending time with the loves of his life -- his wife Andrea, and daughters Emily and Linda (all of whom have an intense love of music too).
RELATED ARTICLES
album reviewalbum reviewsthe jazz butcher
8.0