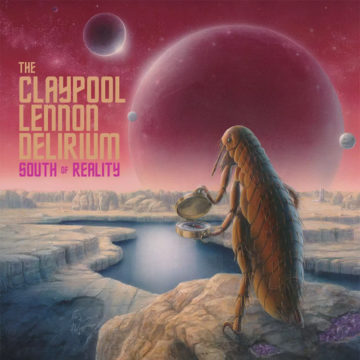 British/American psychedelic rock band The Claypool Lennon Delirium is back in 2019 with their second studio album South of Reality. The band is made up of virtuoso bassist Les Claypool made famous by weirdo funk band Primus, and Sean Lennon, son of Yoko and John Lennon. Given their backgrounds in Primus and Cibo Matto respectively, what comes out of their union isn’t surprising. However, this lack of surprise isn’t a bad thing because this album is more or less everything you could want it to be. With a very old-school psychy type of sound and enough progressive elements to make any Claypool fan happy, it truly ends up doing everything it sets out to do.

The main single from the album “Blood and Rockets” is a masterful telling and sonic encapsulation of the story of famed father of modern rocketry and sex-crazed occultist Jack Parsons. The music video is just as masterful as the track itself, representing well its fun cartoonish vibes with a seriously sinister undertone. The lyrics warn of setting the world on fire with the titular rockets, which is exactly what Parsons did, in the name of Aleister Crowley’s magic. This story, the single, and its content, really are a perfect match for everything that makes this album wonderful. It’s goofy, it’s dark, it’s occasionally deeply beautiful, and you can tell there’s more than meets the eye (or ear) going on in every song.

Hello! I’m Cody McIntosh! I’m a lifelong music fan, blogger, student, writer, and musician, and guitar teacher. I’ve been playing and listening for over half of my life now and I don’t intend on stopping anytime soon. Some of my favorite genres are 80’s New Wave and Post-punk, Hardcore, Jazz, Garage Rock, and IDM. You can find me at a few places online, but below are the main few.
RELATED ARTICLES
album reviewalbum reviewsato records
8.0