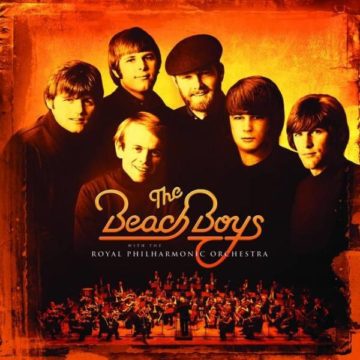 The past decade has been a very good time to be a Beach Boys fan, beginning with their 50th anniversary tour in 2012, which featured Brian Wilson for the first time since 1965 as a full-time touring member, to their great studio album That’s Why God Made the Radio, released the same year, the bands’ first in nearly two decades. Topping that off came the official release of SMiLE in 2011, which fans had been waiting over 40 years to hear. Now the band has the honor of having their iconic hits complimented by dense strings of the Royal Philharmonic Orchestra.

The overall blend of the orchestra and the Beach Boys is quite complimentary. However, the earlier era tracks like “Fun, Fun, Fun” and “California Girls” clash with the backing of the Royal Philharmonic Orchestra, especially the former which seems oddly out of place on the album. On the other hand, it is no match for the poor choice to include “Kokomo” on this record. Out the hundreds of songs to choose from they had to pick this dud? “Forever”, sung by Dennis Wilson, would have been a perfect substitute and would have fit in perfectly with the orchestration. In fact, he is the only Beach Boy not to have a track featuring lead vocals on this album. Even Bruce Johnston, Brian Wilson’s touring replacement turned full-time member, has his “Disney Girls” thrown in there. But in all honesty that is one of the best choices on the album and one that is on par with the 1971 original.

It’s not surprising that the tracks taken from their groundbreaking Pet Sounds album fit extremely well into the lush classical settings. “You Still Believe in Me” in particular stands out from the Pet Sounds era as it is essentially a Bach-like Baroque piece to begin with, but it is “Don’t Worry, Baby” that is the centerpiece on the album. Originally recorded in 1964, it was a step forward for the band and an attempt by Brian Wilson to aspire to more than just the surfing songs he had been composing. Here, the Royal Philharmonic blends their lavish strings flawlessly with the dense harmonies of the Beach Boys.

The album ends with Brian Wilson’s “Teenage Symphony to God” aka “Good Vibrations”, another glorious take on a classic that works seamlessly with the new orchestration.  The song, originally laced with layers of vocal harmonies and psychedelic instrumentation, is complemented further with the extravagant cellos provided by the Royal Philharmonic Orchestra who also give the perfect outro for both the song and the album.

The overall vibe of the record is something similar to Days of Future Passed, the 1967 classic by the Moody Blues, which also featured dreamy pop tunes with dramatic classical interludes. The combination of pop and classical is always a difficult task to pull off, but the Royal Philharmonic Orchestra have come together with the iconic sounds of the Beach Boys and pulled it off successfully.

As a child growing up in the suburbs, Ryan found music as a way to soothe his boredom. After first hearing AC/DC at the age of 10, he was hooked on music. Tracing its roots to the ‘50s, he became obsessed with Elvis, Buddy Holly and Chuck Berry. Somehow that led to grunge, then psych-rock, then jazz, etc. The list goes on and on and his collection of vinyl records continues to grow.
RELATED ARTICLES
album reviewalbum reviewscapitol records
8.0