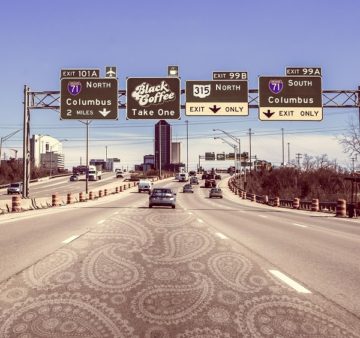 On their debut album, Columbus, Ohio’s Black Coffee shine as potential stars to the growing rock revival that is sweeping North America. The independent release, Take One, harkens back to the 1970s – arguably rock’s golden era – and is a must hear album for any who have praised Greta Van Fleet for bringing classic rock back into focus as Black Coffee do just as well of a job making rock ‘n’ roll feel fresh and exciting.

Take One very much resembles the ritual of that first cup of black coffee in the morning; the first calming sip being the acoustic interlude of the opening track, “Creamer”, followed by the caffeinated punch to the brain that is the full throttle riff of “I Barely Know Her”. Coffee aside – Black Coffee truly is a great name – the first two tracks bleed together, giving the impression that they are actually one song, serving as the perfect sonic introduction for the band; “I Barely Know Her” is as hard hitting as it is groovy, a feat that often separates rock of the ‘70s from that of the ‘80s. That being said, “Hurricane” takes a swing at Van Halen style songwriting and shredding in a chaotic track that feels as if it can very well fall apart at any moment but refuses to let up

The entire band shines across the album’s nine tracks with drummer Tommy McCullough and vocalist and bassist Ehab Omran holding down a steady and groovy foundation for Justin Young to shred tasteful lead lines, punchy riffs, and face melting solos in a manner reminiscent of some of rock’s greatest guitar slingers. Omran’s vocals are truly incredible as he hits astounding high notes and seamlessly shifts from the throat wrenching Bon Scott styled tones of “Born To Lie” to a softer and melodic style on the acoustic ballad, “The Traveller”. As a whole, the power trio is a tight band with a songwriting voice that feels both nostalgic and fresh.

Black Coffee’s Take One is an exciting and thrilling release that, front to back, succeeds at delivering a quality full length rock album that avoids any notion of filler. The album is only more impressive when you consider that it is the band’s debut, giving them a great start that demonstrates an incredible amount of potential for what is to come from Black Coffee.

A passion for music has always been a part of Gerrod’s life. As a young boy, he was raised on a steady diet of the music from The Chili Peppers, Aerosmith, The Stones, Prince, and others from his mum. Raised in the GTA, Gerrod continued to foster his love for music by attending a wide range of concerts and learning the drums. His unapologetic passion for music has no bounds and has spread to a wide variety of styles, whether it be the 90’s rock that sound tracked his teenage years, the jazz he studied in university, or his newfound love for hip-hop. He recently received his bachelors in music and education from York University and is passionate about writing and reviewing good (and less than good) music. Gerrod is also the drummer and songwriter for a Toronto based rock & roll band, One In The Chamber.
RELATED ARTICLES
album reviewalbum reviewsblack coffee
9.0