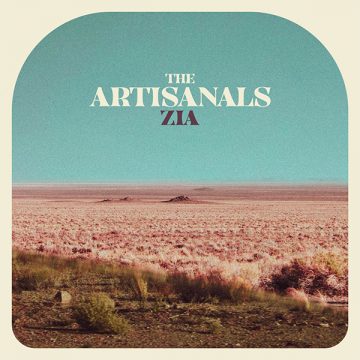 The Artisanals hail from Charleston, SC,  and Zia is their second full-length album.  It comes three years after their self-titled debut. The Artisanals are Johnny Delaware, Clay Houle, Eric Mixon and Eric Klin. Delaware and Houle composed all the songs and this album displays how they have developed their craft. These two have written nine strong, memorable and extremely well written songs.

Musically, the band wears their influences on their sleeves, and that is fine with me, because they take their influences and create their own distinct style/sound. The first track, “Fear To Fail” for example,  is reminiscent of Gordon Lightfoot singing a Tom Petty song. But in the end, it is The Artisanals, and they make the song their own. The band layers sounds and instruments, and yet there is a lot of space in the songs. A slide guitar seeps in, or a synth, but the band never overdoes it with the layered sounds or production. It is beautifully produced and arranged.

Musically, The Artisanals combine Americana with ‘70s singer/songwriter music and a tinge of Beatles. This does not mean that they copy these bands and that all the tracks sound the same, quite the opposite. It is clear that a strong melody and use of harmonies are important to this band.  Again, a song such as “Way Up”, which is a very upbeat, almost pop song, is followed by the very moody “Driftwood”.

Lyrically, these guys do not waste any opportunity to express themselves and express their views of what they observe. It is the kind of an album where a lyric sheet is essential as each song reads like a poem. The last track on the album, “She’s Looking For An Answer”, has a melody and lyrics that are downright painful and beautiful. One would think that it would be difficult to write a song about a woman who has overdosed from the point of view of a  loved one who has asked  to take her home instead of to a hospital. Although it sounds rather depressing, it isn’t. Sad, yes, but also handled with such care and emotion, that the song is outstandingly beautiful.

Zia is an emotional and strong album, reminding the listener that we are human and part of the same world. It is an incredibly strong album musically and lyrically. Another strong contender for album of the year.