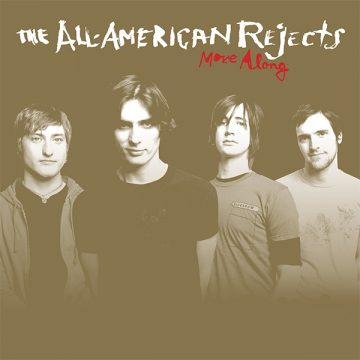 Everyone remembers when bands like The All American Rejects began to surface in the rock scene early 2000s. A contagious earworm for the audio senses is an understatement for what they would achieve and create with their music alone. The All American Rejects would become a favorite for many, hooking fans with ultra-magnetic classics such as “Swing Swing,” with their lyrical charm and infectious power-pop instrumental fervor.

Standing out from the crowd of other bands at the time, All American Rejects was not quite pop, not quite punk, but sat pretty within the genre regions of pop-rock where they could test the waters of their craft.

Tyson Ritter and the band are no strangers to writing material that digs deep. Writing impassioned songs with poignant lyrics and captivating choruses that could win over many fans in the pop-rock and pop-punk scene. When Move Along made its debut in July of 2005, All American Rejects took the formula they had perfected and showed off a bolder sound that was catchier and unmistakably their own.

The second studio album by the star-studded Stillwater Oklahoma natives, Move Along propelled the band forward for success later on in their careers, making them a household name in the pop-rock scene. Achieving RIAA double-platinum status and packing out arenas within the height of a three-year tour cycle, it was an album that signified the glory age of the genre that many would come back to years after.

Having had plans to celebrate the 15th anniversary of the album back in 2020, All American Rejects has now reissued one of their best albums to date in hyper deluxe format, featuring rainbow holographic foil, gatefold inserts. metallic ink, and white and gold nugget variants.

The Move Along Hyper Deluxe Version has never sounded better, taking us down memory lane with nostalgic tracks like “Dirty Little Secret.” With clever lyricism and instrumental energy, it propels the album forward for the myriad of hits that will soon follow.

Another gateway moment on this album is “Move Along,” which provides massive choruses and hooks that still hit and capture the same weight and resonance from years past with its beautiful arena-ready presence.

Callbacks such as “It Ends Tonight,” “11:11,” and “Dance Inside,” will always remain infectious and continue to hold value for fans. With emotionally engaging lyrics, authentic anthemic choruses, and unique instrumental twists and turns, Move Along put an official stamp of potential on the band’s careers and made them successful within the music industry.

For those wanting to go back in time and embrace a pop-rock record that was special and unique for its time, Move Along hyper deluxe edition is worth the listen.