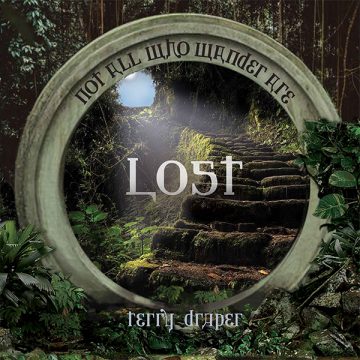 This seemed to come out of the blue, a second album from Terry Draper in 2020. Lost follows on the heels of Sunset On Mars, released by the former drummer and songwriter of Klaatu earlier in 2020. It seemed that he was saving the best for last, as this is clearly one of, if not the best solo album of his solo career.

From the opening track, “Lost”, Draper taps into his prog rock roots. Inspired by J.R.R. Tolkien, the song is the perfect way to open the album and set the stage for the concept Draper creates throughout. The journey is much more important than the destination. The use of repetition in “Lost” is effective in evoking an emotion. “Day After Day After Day” is brilliant in its simplicity, yet there is so much depth here within the context of the song that it is almost unbearingly beautiful. It is a classic song. In the days when FM radio meant something, this song would have been a standard.

The rest of the album follows suit. As usual, Draper is not afraid to experiment with sound and images. “The Sun Never Sets On The British Empire” is somewhat trippy with Kieron Lafferty’s brilliant impersonation of Churchill. The spoken word mixed in with Draper’s incredible instrumentation is stunning. It is almost a psychedelic history lesson, featuring some very nice guitar work from Bill Nadeau.

Although Draper handles most of the music and vocals himself, there are guests such as Jaimie Hoover (backing vocals), Dana and Tricia Countryman (backing vocals), and Alex Davila (guitars, vocals, drums). Like a wizard at the controls, Draper mixes all the sounds together to form a cohesive and consistent sound throughout the album. Musically and lyrically the album flows together and Draper makes a very successful concept album.

Travel the world with Draper, travel through time with Draper, travel within with Draper, but no matter where you go, you are never Lost. He has not only come up with his best solo album, but he just may have delivered the album of the year. It holds together and it is close to perfection. Since leaving Klaatu, Draper has made a cottage industry for himself and continues to grow and astound his listeners.

Born and raised in Whitby, Aaron discovered music through his love of The Beatles. This led to a career in radio, writing for various publications, and ultimately a radio show about The Beatles (Beatles Universe), which ran for over four years. When not immersed in music, Aaron enjoys spending time with the loves of his life -- his wife Andrea, and daughters Emily and Linda (all of whom have an intense love of music too).
RELATED ARTICLES
album reviewalbum reviewsklaatu
8.0