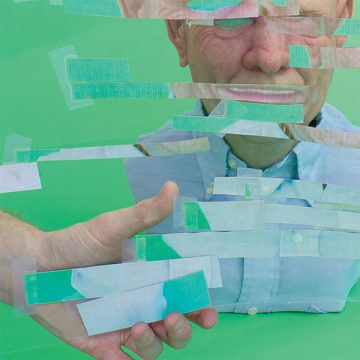 Suffice to say that after 10 years as a band and the release of their 7th studio album, Trash Generator, Tera Melos is simply at their prime. The band is a three-piece melting pot of post-hardcore and punk consisting of Nick Reinhart (Guitar, Vocals), Nathan Latona (Bass Guitar) and John Clardy (Drums).

After seeing the Sacramento-based live as it supported Chon in June, the band seemed to be really excited about the new music they were about to release, with Reinhart posting multiple videos of guitar parts that would be featured on this album. Surely it lived up to the hype the way they were promoting it.

The first song on the album, System Preferences, is a kind of weird bass riff over and over, giving the start to the album a weird vibe. The vocals suddenly creep in which Nick is almost singing and talking in a melody, which then picks up with the drums and guitar coming in, letting you know this album isn’t going to be a relaxing one.

The biggest song off the album though would easily be Trash Generator. With the start of the song being an odd guitar riff that you can’t seem to not move to while listening to it. The drums also play a big role, which makes it sound like he’s cutting the riff kind of short with a really interesting drum fill. About half way through the song, Nick pulls out his massive range of guitar pedals and goes to work on making a bunch of interesting noises which changes up the song a bit before going back into the chorus.

Personally, my two favourite songs off the album are Warpless Run and Men’s Shirt for two completely different reasons. Warpless Run is exactly what it sounds like. From the very beginning it is fast pace and kicks you in the butt. Then all of a sudden, Nick pulls out his pedals again, but this time almost exploding into a bunch of different sounds causing this song to be the most chaotic off the album. Men’s Shirt is the opposite of that song. It is the only song off the album that has a completely different sound than any other Tera Melos song. It’s really laid back and a song that you can just bob your head around to (while it slowly puts you in a trance) and seem to get lost in trances while listening to it.

I had the privilege of seeing Tera Melos in October in their headlining tour with Speedy Ortiz. I could say this was the best concert I have been to in 2017. From start to the end of Tera Melos’ set, I was jumping around, head banging, having the time of my life listening to probably one of the best albums of 2017, maybe even of this decade.

Nicholas Power is a Canadian born photographer from Whitby, Ontario. He has been photographing live shows for three years, and is now getting into shooting for media outlets. He is currently a member of a band called Punchu, and is enrolled in Humber College's Creative Photography programme.
RELATED ARTICLES
album reviewssargent housetera melos
8.0