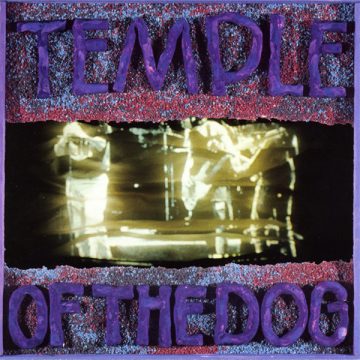 Temple of the Dog’s self-titled one-off album – an album that Rolling Stone believes “deserves immortality” – is turning 25 next month. To mark the anniversary, a 25th Anniversary Temple of the Dog Digital Deluxe Edition is now available online featuring the originally released songs, along with outtakes and demos of the 13 tracks on this epic album.

Temple of the Dog’s 25th Anniversary Deluxe Edition release also anticipates the reunion of the “Super Group of Grunge” for their first-ever tour starting November 4, 2016 – 25 years to the month that the group recorded the monumental album to honour their fallen friend, Andy Wood. Fittingly, the tour begins right after the Day of the Dead

In 1990, the rainy, Grunge-Rock-capital of Seattle functioned as a close-knit community, as many music scenes do, “with creative sparks flying cross-town with little regard to who was committed to what band.” Soundgarden was on tour with their controversial second studio album, Louder than Love, a record that took the band “a step toward the metal mainstream,” according to Steve Huey of Allmusic. This album peaked at 108 on the Billboard 200, while the band toured North America (December 1989 to March 1990), opening for Voivod’s Nothingface tour. At that time, Soundgarden was far from the superstardom that BadMotorFinger would bring them in 1991, Pearl Jam was non-existent, and Seattle’s Grunge-Rock movement was still authentic and underground.

Temple of the Dog formed as a result of the tragic and sudden death of Wood, the frontman to popular Grunge-Rock band Mother Love Bone, from a heroin overdose on March 19, 1990. Wood was only 24 years old. Soundgarden’s Chris Cornell, Wood’s roommate and close friend, was devastated. “Chris and Andy had a very deep relationship,” Soundgarden’s Matt Cameron observed.

When Cornell left for the European leg of his tour, he turned to music to deal with the shocking loss. He wrote two tribute songs dedicated to Wood, “Reach Down” and “Say Hello 2 Heaven” – both recorded onto a cassette tape. These tracks, along with other songs that were written later by Cornell, were laid down during Temple of the Dog’s 15-day recording session at Seattle, W.A.’s London Bridge Studios with producer Rakesh “Rick” Parashar. The 25th Anniversary Temple of the Dog Digital Deluxe Edition includes stripped-down outtakes and demos of these songs.

“I didn’t have any destination for those songs,” Cornell reflected. “I was compelled to write them and there they were – written in a vacuum as a tribute to Andy. My thought was that maybe I could record these songs with the remaining members of Mother Love Bone and that maybe we could release them as a tribute.”

Temple of the Dog was an unanticipated but beautiful alliance between two surviving members of Mother Love Bone Stone Gossard and Jeff Ament (Bruce Fairweather, the guitarist, disappeared after Wood’s death), Mike McCready (McCready, Gossard and Ament would go on to form Pearl Jam with lead singer, Eddie Vedder, six months later), along with Cornell. Cameron was brought in to play drums on several demos, three of which found their way onto the Temple of the Dog album.

The project had “no commercial expectations.” It was simply musicians and friends coming together to commemorate and heal from the tragic departure of Wood through a shared musical craft.

“Temple was about making an album simply for the joy of doing it. We weren’t concerned what anyone outside of our group of friends would think of it. It was the first and maybe only stress-free album that we all made,” Cornell said, later observing how the lack of expectations for the album “made it feel very fresh from beginning to end. We learned to just live in the moment and become open to the idea of collaboration. At the end of the day that was the enormous gift that Andy left us and I’ve thought about it in every situation I’ve been in since then when it comes to writing and performing.”

Gossard, who is a founding member of Pearl Jam, described the recording of Temple of the Dog as “the easiest and most beautiful record that we’ve ever been involved with.”  It was also the first time Vedder would hear himself on a “real record.” Vedder, new to Seattle from San Diego, was vying to front Mother Love Bone’s new project, Pearl Jam. Cornell brought Vedder in to sing backup vocals on three tracks and later decided to use him on “Hunger Strike.” Vedder remarked how it “could be one of my favourite songs that I’ve ever been on. Or the most meaningful.”

A&M Records released the album on April 16, 1991. Temple of the Dog line-up had performed only a couple of times in Seattle in late 1990 and early 1991. “Those shows have become some of the most legendary Seattle concerts of all-time” the Temple of the Dog bio explains, in part because no one anticipated the explosive commercial success of the Seattle Grunge-Rock scene the following year, when “everyone involved with Temple of the Dog would become superstars.” Cornell later commented how Wood’s passing “marked the death of the innocence of the scene.” Some super fans believe that if Wood lived, he would have been the face of Grunge. Not Cobain or Vedder (there would be no Pearl Jam). Wood was incredible, exceptional and a born star.

Soundgarden released its 1991 platinum-selling Badmotorfinger, the first in a series of hit albums, and Pearl Jam’s debut in 1991 “became a monster smash” by 1992. A&M reissued the Temple of the Dog album in 1992 and put out a music video for “Hunger Strike.”’ And the rest, they say, is history.

The differences heard in the outtakes and demos are subtle but for any fan of the Seattle Grunge-Rock scene the 25th Anniversary Temple of the Dog Digital Deluxe Edition is a must-have collector’s item. The hit single, “Hunger Strike” (still in rotation on radio today), along with the Temple of the Dog album, serves almost as a foreshadowing for the breakout success that would follow Soundgarden and Pearl Jam.

The fact that Temple of the Dog was formed by an “organic” group of musicians for such an honest cause, right before the Grunge-Rock scene exploded, is extremely poignant. “We all learned this really important lesson that we could record as a group that had never made a record together before and do something special,” Cornell said. “It made me open to the notion that art for art’s sake can result in something special.”

Wood’s tragic and sudden death in 1990 completely changed the course of history for Seattle Grunge-Rock music. “Andy Wood was never a member of Soundgarden or Pearl Jam,” the band website states, “but in a way he’s always been part of their histories.”

For those reasons, the 25th Anniversary Temple of the Dog Digital Deluxe Edition, along with the reunited group’s first official upcoming sold-out eight-show tour salutes the “enduring bonds” that emerged 25 years ago in the nascent Grunge-Rock scene. “We wanted to do the one thing we never got to do… play shows and see what it feels like to be the band that we walked away from 25 years ago,” said Cornell. “This is something no one has ever seen. We wanted to stop and recognize that we did this and pay homage.”

Order your copy of the 25th Anniversary Temple of the Dog Digital Deluxe Edition here: www.templeofthedog.com.

Talia Wooldridge is an avid music lover, composer and ethnomusicologist who contributes artist interviews, live concerts, festivals and album reviews for Spill Magazine. She has written extensively on the intersection of music, personal identity and cultural symbolism with an early focus on Latin American Hip Hop and female Cuban rappers. In her spare time, Talia writes, composes music and manages Music Can Heal, a non-profit that brings live, award-winning musicians to inspire healing in hospitals, hospices and communities in need. Her next project is an interactive music-travelogue exploring music cultures and music travel around the globe. Follow her here: www.taliawooldridge.com + www.movetoyourownbeat.com.
RELATED ARTICLES
album reviewschris cornellinterscope records
9.0