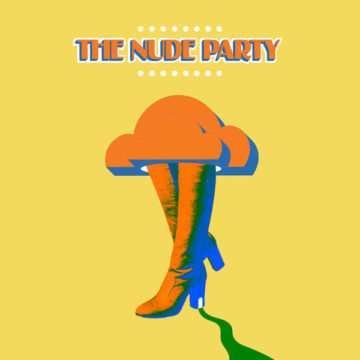 The Nude Party is the debut album from The Nude Party. They have released an EP, but The Nude Party is their first full length album, and for the most part, it lives up to expectations. Based in the Catskills of New York, this band has one foot firmly planted in the past (listen to “War Is Coming”) and one foot firmly planted in 2018 Alt-Country/Americana. And give a listen to “Records”, which sounds like The Rolling Stones, circa 1971.

One thing is clear, their incredible amount of touring and live shows has had a very positive impact on this band. Originally from North Carolina, the band has since  moved to upstate New York to write and record this album. The Nude Party consists of Patton Magee (guitar/vocals), Shaun Couture (guitar/vocals), Alex Castillo (bass/vocals), Don Merrill (organ/piano/vocals); Austin Brose (percussion/vocals) and Connor Mikita (drums/cowbell). The album was produced by Oakley Munson (The Black Lips) and at times, one feels the ghost of The Band being channeled in the album. This is due, in part, to Munson’s production which taps into the 1960’s production style.

The musicianship is top of the line, excellent instrumentation throughout, and the band has a tight solid sound. The album is consistent throughout with a healthy dose of twang guitar and, lets be honest, cowbell. I think we can all agree there is far too little cowbell on albums in 2018. Again, the sheer amount of touring has contributed to their sound, and it is a good example of why playing many gigs before recording is so important.

It has also given the band time to write some terrific songs. Lyrically they are quite humorous at times. The lead single, “Chevrolet Van” is a well crafted song with lyrics such as “You’ll never make enough money, and no one cares about the things you say”. Funny and poignant, almost a rebel cry. So what if they do not make a lot of money, The Nude party is not hurting anyone. If anything, they do spread a great deal of joy.

The Nude Party is not a party band, but they are a band that makes very likeable, well-produced and well thought-out music. The Nude Party is an impressive debut, and one cannot help but think about how good this will sound live. It is also an indication of things to come. This is a band that will continue to grow, experiment, and develop.

Born and raised in Whitby, Aaron discovered music through his love of The Beatles. This led to a career in radio, writing for various publications, and ultimately a radio show about The Beatles (Beatles Universe), which ran for over four years. When not immersed in music, Aaron enjoys spending time with the loves of his life -- his wife Andrea, and daughters Emily and Linda (all of whom have an intense love of music too).
RELATED ARTICLES
album reviewalbum reviewsnew west records
8.0