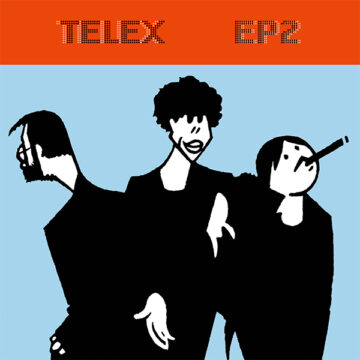 Belgian new wave and synth-pop band Telex, Kraftwerk’s more accessible musical neighbour, was known for their unique blend of electronic and experimental music. Founded in 1978 and releasing several albums in the 1980s they enjoyed success in Europe and a cult following in the US.

Disbanded at various times and for good in 2008 this Telex box set of their six studio albums, reminds us of their progenitor status and gently suggests, if not outright asks, “Can what is old be new again?”. The box set promises the usual panoply of colourful and visually pleasing content to accompany the audio content.

More interesting is the Telex EP2 of remastered tracks, released today. Curated to present one track from each of their six studio albums it presents the surviving members’ take on what belongs and what fits best for their fans and today’s electronic music devotees.

By today’s standards most of the tracks feature what are considered “cheesy” synths that share a sound palette with old school video games. Their simplicity is endearing and effective. Combined with the continental European inflected English spoken word these tracks have an otherworldly, if not disembodied sound, that at the time of release were unique and fresh and today are cast in that time.

Lyrics such as Telex’s “Tour de France’s” (no, not that one) “You go so fast. I follow you, but, too slow, dommage, no time to waste” combined with a relatively slow beats-per-minute (BPM) imbues the calm sense of urgency that pervades the EP. The road to wherever they were going was uncertain, but they could take their time getting there.

Today that uncertainty prevails, the road is pretty bumpy and things move more quickly. Our world is filled with the re-litigation of the past through a modern, but at times, distorted lens and crystallized through the heads of old statues painted red and rolling around on the ground.

The Telex EP2 is a statue of a time and place that is very different from today. It is much better to judge them for their important place in history rather than how they would fit into today’s dancehalls.

“Haven’t we met somewhere before?” Telex asks. “Stop me if you heard that before.” Part entreaty and part pick up line, they invite you in to listen.

Yes, we have met before. You still look and sound very good. You have aged very well.

Paul is a Dutch-Canadian electronic music producer that produces and performs as apaull. He is also an environmental scientist and, in that role, has published more than 200 articles, from layman to academic level. He is looking to morph these life experiences into thoughtful record reviews and feature articles.
RELATED ARTICLES
album reviewalbum reviewsmute records
8.0