SPILL ALBUM REVIEW: TEGAN AND SARA – LOVE YOU TO DEATH 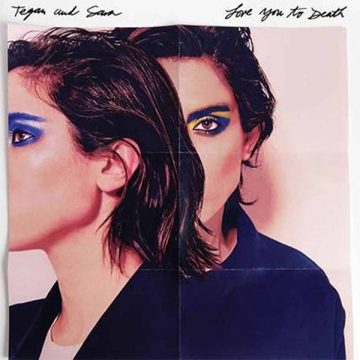 Tegan and Sara
Love You To Death
Vapor Records

Love You to Death by Tegan and Sara is a highly personal album featuring 10 songs about loving relationships, both romantic and platonic but the subject of love never feels overplayed. The band handles every track with a fresh outlook and never hits the same emotional chord with any two songs. If clever references, heartfelt lyrics and great electronic pop music is what you’re looking for, look no further, this album is for you.

“That Girl” is a strong pop opener with enough thought put into the harmonies to keep it interesting. Lyrically, the song is self-questioning. “When did I fall so far? Barely recognize me. When do I move on? So I recognize me.” The lead single, “Boyfriend,” sounds like what might happen if Morrissey began writing lyrics for Chromeo. It is a fantastic track with a great beat and fun electronic music. Meanwhile, the lyrics suggest an unsatisfying hidden relationship that either has to end or be revealed. “Dying To Know” has an ear-catching opening that leads into a song about a need for closure while “BWU” has a dance beat and is chock full of references to love song standards. “I don’t need a ring to prove that you’re worthy, you’re under my skin.” “Hang on to the Night” is the final track on the album and much like “Someday,” the final track from Tegan and Sara’s Sainthood, the song deals with weakness and potential. The song is like an Indie Pop “Whatever Gets You Through The Night.” It hits you hard but ultimately the message is hopeful.

Tegan and Sara have been constantly reinventing themselves since they first achieved success in the early 2000s. They have experimented with acoustic Folk, Indie Rock and Indie Pop. The twin sisters have won three Juno Awards including Pop Album of the Year for Heartthrob as well as Group of the Year, both in 2014.

SPILL ALBUM REVIEW: TEGAN AND SARA – LOVE YOU TO DEATH

Daniel Mallett is a young journalist from London, Ontario pursuing a career in arts and entertainment writing. He enjoys music, theatre and visual arts and hopes to learn as much as possible about the artists working in Canada today. Mallett is also one half of the Toronto based folk duo Howl & Other Problems.
RELATED ARTICLES
album reviewstegan and sara
8.0