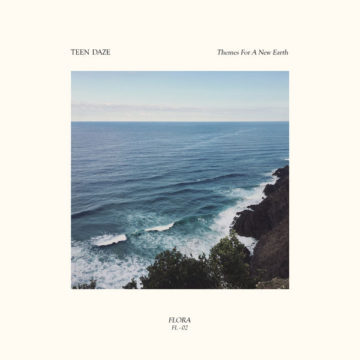 Jamison Isaak (aka Teen Daze) and his newest album feel shine with a new sort of optimism. Titled Themes for a New Earth, this release is a counterpart to his last album, Themes For Dying Earth, which came out last February as the more pop driven side of Teen Daze’s music, showing off his songwriting and vocals abilities. It is a collection of songs that is comparatively mostly instrumental, and ambient as it paints a big picture of our world today. As the second release on his own label, FLORA, Isaak explores new territory with dizzying guitar lines and animated ethereal noises.There is plenty to experience on this new record, but it takes time. The work is confident and calming with a certain air of patience.

Opening with “Shibuya again”, Isaak transports you into an almost Final Fantasy-esque world. For those who haven’t played the video game series (one that is famous for its soundtrack in its own right), try to imagine an immersive world that meshes calm cities with beautiful landscapes. An interesting image when you consider that Isaak’s third track on the album “Kilika” is a direct reference to an island in the game.

The album then continues with track like the floaty and groovy “Wandering Through Kunsthal,” gives you the feeling of being weightless, floating above the clouds. On the following track, “Station” the speakers are filled with drifting ambient noises. It’s a gorgeous post-rock number comparable for those who love the works of bands like Hammock and Eluvium. “On The Edge Of A New Age” offers a euphoric feeling backed by lighthearted drumming and optimistic pads filling the space.

The final track, “Prophets”, feels most appropriate as slowing tempo lulls you to sleep as if to say that you are free to relax as you so choose. Overall, it is a track that rounds out an album surrounding self-reflection.

While Jamison’s the last record helped him focus more on lyrics and attention to crafting a song, here he has focused on his vibey songs. Using incredible instrumentation and thought-provoking sounds, Jamison has offered a beautiful, melodic, and mostly ambient record. For me, Teen Daze is trying to depict an idea that we can creatively and affectively interact with the beauty of the world. Take the ocean, standing on top of a mountain or sitting in a calm meadow, all of these have a sound and evoke some sort of emotion. Daze recreates some of those feelings and offers it all up with a sense of both hope and wonderment.

Teen Daze will be on tour in Canada and US, with BAIO in November.

Here's what we think...
Spill Rating
Fan Rating
Rate Here
New Criteria
10
—
10
Total Spill Rating
—
Total Fan Rating
You have rated this
Album Reviews
album reviewsfloraon the edge of a new agestationteen dazethemes for a new earthwandering through kunsthal
album reviews, flora, on the edge of a new age, station, teen daze, themes for a new earth, wandering through kunsthal
About the Author
Andrew Smith

After majoring in business & entrepreneurship at UCSB and traveling the world, Andrew moved to Los Angeles to pursue music and not give up his love for surfing, hiking and yoga. He is also in a couple really cool, up and coming, indie-rock bands in LA - Mothlight & Lone Kodiak.
RELATED ARTICLES
album reviewsflorateen daze
9.0