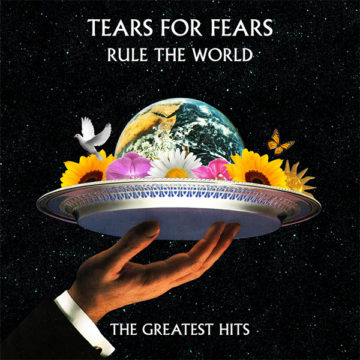 Tears For Fears
Rule The World: The Greatest Hits
Virgin/Universal

With Halloween having come and gone, we come to be surrounded by the same tell-tale signs of the holiday season quickly approaching. The store displays, the Christmas music being played in stores and on the radio, and most importantly, bands releasing greatest hits albums. What better time for fans to get caught up on their favourite bands than Christmas? As industry veterans, Tears For Fears releases their fourth official (this count does not include the compilation released by their record label) best of collection this holiday season. As an album, Rule The World: The Greatest includes not only the band’s titular greatest hits but also welcomes the inclusion of two new songs.

Since 2004, Tears For Fears has toured extensively, and the new song, “I Love You But I Am Lost”, a collaboration with Bastille’s Dan Smith and producer Mark Crew, makes for an interesting addition to their new album. Melodic, great harmonies, strong musicianship and a chorus that sticks in your head from the first listening. If you listen closely, Smith can even be heard singing on the track. “Stay” is a little more different than their norm, with a slight Pink Floyd vibe.

What makes this compilation different from other collections is that they have made the decision to include songs that were released under the name Tears For Fears when one half of the band was not there. Curt Smith had left the band shortly after the Sowing the Seeds of Love album in 1992, so Roland Orzabal soldiered on without him, producing two studio albums on his own. Smith would later rejoin the band in 2004 and they would record the album Everybody Loves A Happy Ending.

The fact that they include songs from Elemental and Raoul and The Kings of Spain indicates that Orzabal sees those two albums as part of the Tears for Fears legacy of Tears. Indeed, we agree with him, since there were excellent songs on both of those albums, “Break It Down Again” made top ten in England and Canada and is a fantastic song that can stand up to songs like “Mad World” (also included on the set). The title track from Raoul and The Kings of Spain is also here and although the song was not a hit (nor was the album), it is well worth searching out, as it was a brilliant album, sadly overlooked.

The predictable hits are all here, and all together on one collection they do sound great again. A lot of this collection was performed by the band when they toured this summer. For those who were around for the first time these songs were released, it is great to relive those times, and for newcomers, it serves as an excellent introduction to the band. The fact is, although they were a great singles band, they were at their best on their albums where they could expand on their ideas with their songs in their proper context.

While there has not been a studio album since, there was an EP, Ready Boys & Girls, that consisted of cover versions that they do not include in this collection. This is a wise decision, as that EP is not one of their best moments. There are no rarities here, although “Change” and “Shout” are presented here as radio edits, and “Pale Shelter” is the second version recorded for their second single.

But that is not the point of this release, this is a celebration of one of the best bands to emerge during the 1980s. Tears For Fears always released incredible albums and music and should be celebrated. It is also nice to hear Smith and Orzabal together making new music. Thirteen years is a long time to wait for new music from this extremely talented duo. One can only hope these new songs, along with their recent tour, spurs the band to record a new album.

This makes a perfect Christmas gift, but you might want to pick up a copy for yourself. It is also the first compilation by the band to be available on vinyl, which could not make me happier. A beautiful collection, that would have been better had it been placed in chronological order, but small complaint about an album full of brilliant songs.

Born and raised in Whitby, Aaron discovered music through his love of The Beatles. This led to a career in radio, writing for various publications, and ultimately a radio show about The Beatles (Beatles Universe), which ran for over four years. When not immersed in music, Aaron enjoys spending time with the loves of his life -- his wife Andrea, and daughters Emily and Linda (all of whom have an intense love of music too).
RELATED ARTICLES
album reviewstears for fearsuniversal
9.0