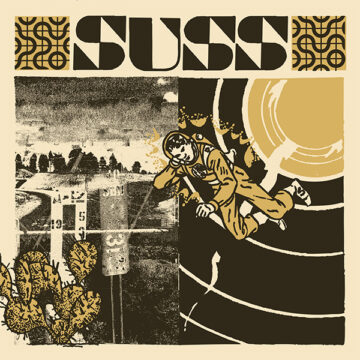 Ambient country has become some sort of a buzz word during the past few years, but there isn’t much talk of when, where, and how did this recent fave come about.

Actually, New York’s Suss (Bob Holmes, Pat Irwin and Jonathan Gregg) along with their late founding member Gary Leib, have been meddling with the idea of combining Brian Eno-type ambient with Ry Cooder’s concept soundtrack for Paris Texas for a while now, only to present the fully-formed idea with their initial release Ghost Box back in 2018. In that manner Suss practically became pioneers of ambient country.

Leib passed away in 2021 but the three remaining members decided to soldier on, and the result is this double album, simply titled Suss. The results are simply brilliant and are certainly best representative of why Suss has become such a critical favorite. Divided into four distinctive parts –“Night Suite”, “Heat Haze”, “Winter Was Hard” and “Across The Horizon”, Holmes, Irwin and Gregg actually do create four distinctive atmospheres with the guitars and pedal steel sounds leading the way in creating some of the more astounding ambient movements, whether you attach the country tag to them or not.

Formerly a lot of things, including a journalist and a translator, currently a freelance writer living in The Netherlands.
RELATED ARTICLES
album reviewalbum reviewsnorthern spy records
8.0