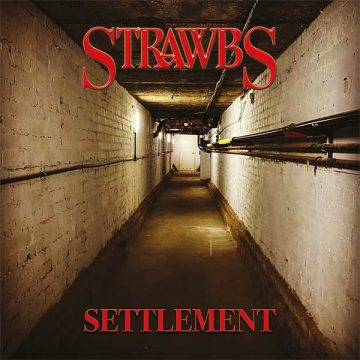 The Strawbs released their self-titled debut in 1969, their first official album. This is their 27th release, and their second with this particular lineup. Once again the band has not only reinvented itself, but produced one of their finest albums.

Settlement was produced by former member Blue Weaver, who left the Strawbs for The Bee Gees. He has captured their history on one album, it is all here. Opening with the title track, a hard rock number with a great melody, which also features a top-notch organ solo from Dave Bainbridge, while longtime member Dave Lambert provides an inspired guitar solo. Dave Cousins, of course, on vocals, sounds great.

It is the perfect way to open the album.

And just as one is getting used to the heavy side of the Strawbs, they switch gears and slow things down with the beautiful and mellow “Strange Times”. That is the beauty of Settlement, the diversity. Listen to “The Visit”, which channels the best of Irish folk music. It will bring a tear to your eye. And then there is the closing track, the epic “Champion Jack”.  This is prog rock at its finest. It also harkens to classic Strawbs songs, where Cousins tells a story. This format worked 50 years ago, and still works today.

In 2019 the Strawbs celebrated 50 years together. Here they are in 2021, producing an album that stands shoulder to shoulder with their best work. It is a stunning and strong album that transports the listener in mind and spirit. Strawbs have always been timeless because they have not jumped from trend to trend. Here, they are doing what they do best, and are a tight unit producing that sound. Settlement is a classic album.

Born and raised in Whitby, Aaron discovered music through his love of The Beatles. This led to a career in radio, writing for various publications, and ultimately a radio show about The Beatles (Beatles Universe), which ran for over four years. When not immersed in music, Aaron enjoys spending time with the loves of his life -- his wife Andrea, and daughters Emily and Linda (all of whom have an intense love of music too).
RELATED ARTICLES
album reviewalbum reviewscherry red records
7.0