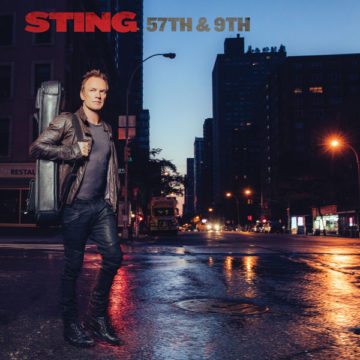 Sting has never been afraid of change. His music has constantly morphed since his days with The Police. His hits like “Fields of Gold”, “Desert Rose”, and “Englishman in New York” (just to name a few) changed the definition of adult contemporary music and each single was a distinct standalone entity. This flexibility and willingness to create something unlike anyone else is particularly evident on Sting’s latest 57th & 9th.

Named after the Manhattan street corner that Sting would cross everyday on his way to the recording studio, 57th & 9th has something for everyone. Produced by Martin Kierszenbaum, the album features a diverse combination of sounds. There are hints of jazz, pop, and even country woven into the typical rock elements.

The album opens with the classic rock sounds of “I Can’t Stop Thinking About You”. It is the kind of song that Sting fans have been waiting to hear again since tracks like “Roxanne” and “Message in a Bottle”. Tracks like “Inshallah” and “Heading South on the Great North Road” are solemn and tug at the heart with their ballad-like qualities and softer melodies. On the other hand, there is the gruff heavier rock track “Petrol Head” that feels out of place, even for Sting. While it is full of rollicking fun, Sting’s sultry voice pushed to this hard rock extreme doesn’t quite add up, for some reason, and the track falls a bit flat.

Yet there is one track on the entire album that stands out. With so many music legends passing in 2016, leaving behind a void of talent and artistic merit, it’s no surprise that someone would create a song about it; and Sting was the perfect fit to write such a song. “50,000” not only gives a voice to Sting’s grief of having lost friends and colleagues, the song is also an honest social commentary that examines how we treat such legends after they have died. With his unabashed jabs at the floods of social media quotes and tribute albums after a music legend’s passing, he also points out how quickly the paparazzi slander those same legends. Within this same song, Sting recognizes his own mortality and the toll that a rocker’s life has had on him. Perhaps this song stands out because of its honesty, or maybe because it’s rare for a rocker to describe themselves as imperfect and mortal in such detail. Whichever it is, “50,000” is a rare glimpse into a famous musician’s creative soul.

Samantha “Sam” Stevens is half a music journalist, and half an academic scholar. With a graduate diploma and MA in Journalism, Sam has covered musicians all over the world and her work has appeared in Guitar Girl magazine, North Bay Nugget newspaper, The Link newspaper, and a few others. She even founded and managed her own music blog The Littlest Voice for 5 years, in which the spotlight was thrown on new and emerging indie artists around the globe. Currently, Sam is a PhD student at Carleton University in the School of Indigenous and Canadian studies where she is continuing her MA research on colonial language in Canadian news and government institutions.
RELATED ARTICLES
album reviewsstinguniversal music canada
8.0