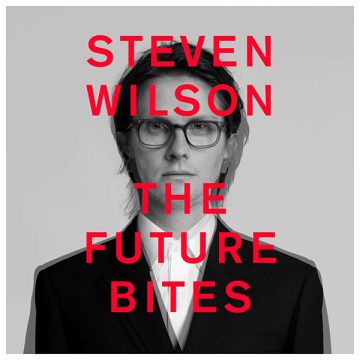 The Future Bites is the first album of new material by Steven Wilson since 2017’s To The Bone. That is not to say he hasn’t been busy. And now, as with everything Steven Wilson does, he does the unexpected.

On the surface, this seems to be pretty much a standard art rock album, full of textured, layered sounds. However, working with co-producer, David Kosten (Bats For Lashes, Everything Everything), Wilson has fashioned an album full of strong melodies and very strong, topical lyrics. The title gives the game away. Wilson is looking at the world and he has something to say.

The album opens with the short, atmospheric, and somewhat disturbing “Unself”, full of voices and the parting shot ‘love is hell’. This gives way to the equally disturbing “Self”. There are many references to ‘self’ throughout the album, but not always in a positive manner. ‘Self is too self-detached’, he states clearly in “Self”. It is a very strong moment.

Along the way, he gets help from Elton John, who makes a stunning appearance on the dark “Personal Shopper”. The song serves as a centrepoint and summarizes the overall theme. In Wilson’s view, our self worth is measured only by material possession and gain. Once again, the use of the word ‘self’ not only drives the point home, but creates a very uncomfortable atmosphere.

The closing track, “Count of Unease, is a breathtaking excursion into ambient prog rock. “Did I believe the words I spoke?”, Wilson asks. It is refreshing for an artist to question his own behaviour and attitudes.

The Future Bites is one of Wilson’s best albums. He has observed a great deal over the past few years, and working on some of rock’s greatest albums has certainly inspired him to reach for new heights. He reaches and succeeds on this fantastic album.

Born and raised in Whitby, Aaron discovered music through his love of The Beatles. This led to a career in radio, writing for various publications, and ultimately a radio show about The Beatles (Beatles Universe), which ran for over four years. When not immersed in music, Aaron enjoys spending time with the loves of his life -- his wife Andrea, and daughters Emily and Linda (all of whom have an intense love of music too).
RELATED ARTICLES
album reviewalbum reviewsarts & crafts
8.0