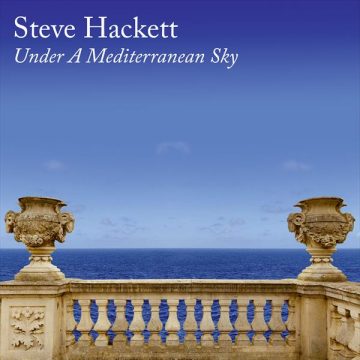 Steve Hackett
Under A Mediterranean Sky
Inside Out Music

Under A Mediterranean Sky is Steve Hackett’s first studio album since 2019’s At The Edge Of Light, and his first classic one since 2008’s Tribute. However, while it is classical, Under A Mediterranean Sky is primarily an acoustic release. It is a direct result of his extensive travels around the Mediterranean, drawing inspiration from the music he heard and the sights he visited. The end result is a stunningly beautiful album, full of some of the best guitar playing you will ever hear, and some breathtaking melodies.

While the album consists of original songs by Hackett (most co-written with his wife Jo and Roger King), he does cover a piece of Italian composer Domenico Scarlatti, best known for his music from the 18th century. Here, Hackett takes on “Scarlatti Sonata” with a great deal of success. It is incorporated into the album in such a way that one can easily forget that it is not one of Hackett’s compositions.

Under A Mediterranean Sky  is full of moving and inspirational moments. Listen to Christine Townsend’s violin in “The Memory of Myth”, combined with Hackett’s sensitive musicianship. It is an incredible moment that leaves an huge impact. Strong melodies, expert musicianship and soul-searching tunes. The album concludes on a high note, the majestic “The Call Of The Sea”. Hackett creates scenery with his guitar. It is quite an astounding achievement.

Hackett has produced some fantastic classical works since leaving Genesis at the end of 1977. Under A Mediterranean Sky is a fresh take on classical music and once again demonstrates that Hackett has a great deal to say, with just his guitar. While several artists have attempted classical work and failed, Hackett succeeds because he has a deep understanding of it and an awareness of the inspiration. He was definitely inspired for Under A Mediterranean Sky, and the end result as an album for the ages.

Born and raised in Whitby, Aaron discovered music through his love of The Beatles. This led to a career in radio, writing for various publications, and ultimately a radio show about The Beatles (Beatles Universe), which ran for over four years. When not immersed in music, Aaron enjoys spending time with the loves of his life -- his wife Andrea, and daughters Emily and Linda (all of whom have an intense love of music too).
RELATED ARTICLES
album reviewalbum reviewsgenesis
6.0