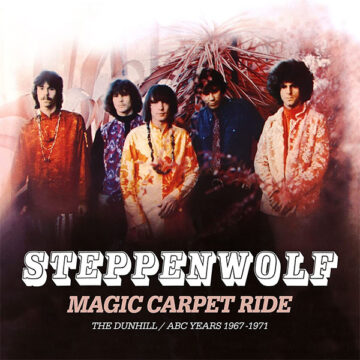 Steppenwolf was created in 1967 with former The Sparrows members John Kay, Goldy McJohn, and Jerry Edmonton, along with Michael Monarch and Rushton Moreve. They released eight albums under the ABC/Dunhill Records label before disbanding for the first time in 1972. Magic Carpet Ride: The Dunhill/ABC Years 1967-1971 is a reissue of their work under the ABC/Dunhill Records label.

Included in this set is the band’s most politically charged album, Monster. It refers to important events at the time, such as the Vietnam War. Three tracks make up the opening medley. “Monster” gives a reminder of America’s past and how difficult it was to start anew. “Suicide” mentions how the leaders should help the country in a positive way, but just provide lip service, telling citizens what they want to hear. The final portion of this medley, “America”, personifies the country, wondering where it is. This medley shows the challenges that still exist in America and how we need to work together to make a better, stronger country. Although time has passed, this medley still holds true today.

The last album included in this set, For Ladies Only, includes themes of romance and feminism. “The Night Time’s For You” encourages a woman to take control and be in command in the relationship. Following a breakup, “Sparkle Eyes” asks where the spark went between a couple. There is a different tone and focus to this album, which is nice to hear.

An added bonus to this box set is the inclusion of 26 bonus tracks. While most of them are mono single versions, there are some rare ones, including “Screaming Night Hog” and “For Madmen Only.” It is interesting to hear not only these rare songs, but also the mono versions to see how they changed before being finalized.

Overall, Magic Carpet Ride: The Dunhill/ABC Years 1967-1971 has it all. From well-known hits such as “Born to Be Wild” and “Magic Carpet Ride” that put Steppenwolf on the map, to the hard-to-find singles that may surprise die-hard fans, this 8-CD set has something for everyone.

Courtney is a music enthusiast based in the US. She enjoys going to concerts. While she likes a variety of music, her favourite genres are pop and rock.
RELATED ARTICLES
album reviewalbum reviewsesoteric recordings
8.0