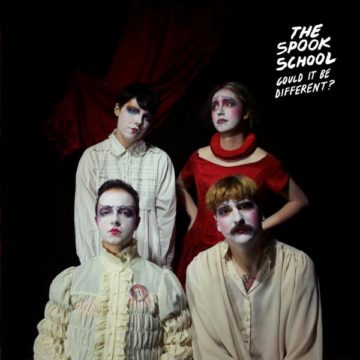 The Spook School
Could It Be Different?
Slumberland Records

With Could It Be Different? The Spook School brings their theatrical brand of indie pop full circle. Following the release of 2015’s Try To Be Hopeful, the group finds themselves as highly-spirited of a band as they’ve ever been. On their third LP the band continues on their quest of personal self-discovery in the midst of one of the tensest sociopolitical climates in decades. Since their debut in 2013, the group consisting of vocalist/guitarist Nye Todd, bassist and vocalist Anna Cory, guitarist Adam Todd, and drummer Niall McCamley have never been a group to shy away from songs with lyrical substance that have a level of added weight to them.

On Could It Be Different?, however, its the added layer of personal storytelling that shines heavily on the new LP. While past albums dealt with big themes and subject matter that tackled the fabric of our social constructs, Could It Be Different? sees vocalist and guitarist Nye Todd pen some of the most confessional songs he’s written to date. Album opener “Still Alive” wastes no time setting the tone for the record. As a post-punk gem, the track radiates through fuzzed-out guitars as Nye Todd confronts an emotionally abusive relationship with a defiant “ Fuck you, I’m Still Alive” chorus that rings as a triumphant conquering of one’s demons.

As personal as the songwriting is on the new record, the group doesn’t shy away from confronting the current political climate we find ourselves in. On album highlight “Bad Year,” the track opens with a subtle vocal delivery from Todd, before bellowing to an anthemic roar midway through as he channels his dissatisfaction with the recent events in the U.K., which according to Todd was written around the time of Brexit as a way to cope and deal with the current sociopolitical climate in the U.K.

The unwavering optimism that rings through the album acts as the heartbeat for the entire record, and sets it apart from past albums. This optimism is most prevalent on tracks “Body” and “Alright (Sometimes),” which, over jangly guitars and infectious melodies, sees Nye Todd finally come to terms with the road to self-love, and embracing arriving at his final destination. For a band that has cultivated a seamless blend of style and substance, Could It Be Different? is the album they’ve been working towards and leaves one anxiously awaiting what’s next from the group.

Carlos Cajina is a documentary photographer and writer based out of Toronto. With a passion for storytelling, his love of photography is equally matched by his passion for music. At night, he moonlights as a freelance writer and music journalist, covering the latest in local and independent music culture for various blogs and outlets.
RELATED ARTICLES
album reviewsbody
8.0