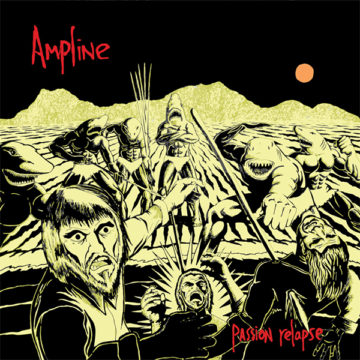 Pure energy from the first second to the last, Passion Relapse begins with the short-but-powerful “Shrunken Heads” and does not let up to the last few seconds of the last track, “Stab.” This is energetic punk/rock and it is a ball of energy.

Ampline is a Cincinnati-based band, who has been making albums since 2001. Passion Relapse is their fifth studio album. Over the years, this trio has produced some damn good hard music. Kevin Schmidt (bass), Rick McCarty (drums) and Mike Montgomery (guitar) make a great deal of noise for three guys. But the noise is structured, well-written and damn interesting.

They are smart enough to pace the album as well. By track four, the listener is ready for a little break, and that is what you get with the instrumental “Rigging Snaps.” Some tasteful guitar playing from Montgomery and much more subdued Ampline. It is not a ballad, but it is different from the rest of the album.

Then you are right back in it with “Charm Offensive.” I appreciate when artists sequence their albums to not only make sense lyrically but sonically as well. It is not a long album and the songs are short but, again, powerful. They know when to end a song. They never overstay their welcome. It is also worth noting that the band recorded the album in an analog-based studio, which adds to the overall atmosphere of the record. Although well-produced, it is not overly clean, nor should it be. The playing is sharp, but the sound of the album is perfect for the music.

Lyrically, the album is somewhat of a concept album. Basically, the album is a myth. A story about a long sea voyage. The sailors here are looking to find the end or edge of the world. This allows the band to explore many topics, such as alienation, theology, death, and man’s struggle with technology. It is not easy to decipher all the lyrics, and a lyric sheet would be handy, but the songs begin to speak for themselves, both musically and lyrically.

This is not hardcore punk, but it is hard music and may not be to everyone’s taste. However, what sets Ampline apart from other bands is that they seem to concentrate on melody and sequence the album so it does not feel as though your senses are being assaulted. Passion Relapse (great title, by the way) is a great album. Fans of hard-driving rock with one foot in punk will love this album.

Born and raised in Whitby, Aaron discovered music through his love of The Beatles. This led to a career in radio, writing for various publications, and ultimately a radio show about The Beatles (Beatles Universe), which ran for over four years. When not immersed in music, Aaron enjoys spending time with the loves of his life -- his wife Andrea, and daughters Emily and Linda (all of whom have an intense love of music too).
RELATED ARTICLES
album reviewssofaburn records
8.0