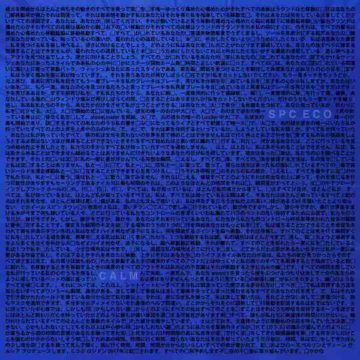 Shoegazers rejoice; SPC ECO is back at it again. It’s been ten years since the release of their debut album, 3D, and the duo consisting of Rose Berlin (vocals and lyrics) and Dean Garcia (multiple instruments and producer of the album) can now count the release of their ninth album, Calm. Don’t let the name fool you though; this album is so much more than what it implies.

Many remember Garcia for his involvement in the band Curve and fans have since followed him in his transition to making music with his daughter, Berlin. But don’t let that worry you, these two work together to produce unique, hard driving, yet atmospheric music. There are a number of guests on this and their previous albums, but Berlin’s vocals and Garcia’s music remain the real stars here. On this album, SPC ECO is joined by Jarek Leskiewicz (guitar, drones, ambience and bass), Perry Pelonero (guitars on “Out Of Sight”) and Justin Welch (drums on “Out of Sight”).

The album kicks off with a wall of sound. “Out Of Sight” is an apt title. Garcia comes at you with a force not found in nature while Berlin delivers almost wistful vocals, and it works. You do not get a chance to catch your breath before you are kicked into “All The Voices”. And again, the title seems to sum up the music. It is a brilliant follow-up and the album continues from there.

To categorize this music is difficult. Garcia brings his over two decades of playing with various artists and styles so the music is multi-layered. It is hard techno at times, and other times it is ‘90’s dance music. It is all over the place. The only consistent is Berlin’s vocals, which remain constant throughout. She is able to find her voice in each song and this is the absolute treat of the album. “Ghosts” gives the listener a break from the grind and demonstrates their ability to delve into other sounds, I just wish there was more of it throughout the album.

This is the only downside of the album. Although a variety of genres are blended throughout, the album does not have a great deal of variety, and it is only until the end of the album that one is grounded with the stunning and somewhat dark and heavy, “Hours”. This is a highlight of the album and the absolute perfect ending to this album.

Overall, a great album, sometimes difficult to grapple with, but worth the effort. It is melodic and at times it assaults your sense. But it is all in the mix for SPC ECO. Calm is its own album and their own style. Fans of Curve and SPC ECO will not be disappointed. And who knows, it may even win over some new fans.

Born and raised in Whitby, Aaron discovered music through his love of The Beatles. This led to a career in radio, writing for various publications, and ultimately a radio show about The Beatles (Beatles Universe), which ran for over four years. When not immersed in music, Aaron enjoys spending time with the loves of his life -- his wife Andrea, and daughters Emily and Linda (all of whom have an intense love of music too).
RELATED ARTICLES
album reviewsspc ecotapete records
8.0