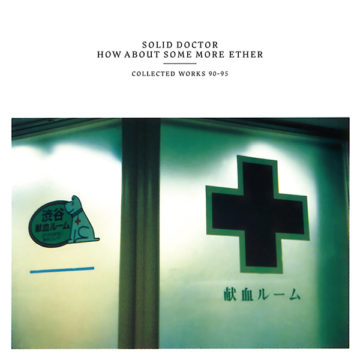 Steve Cobby, aka Fila Brazillia, aka Solid Doctor, brings us an incredible six disc retrospective of re- mastered and unreleased material from the Solid Doctor back catalogue.

While “trawling” through a series of pseudo-labelled DAT tapes to remaster original tracks for a retrospective album, Solid Doctor came across a number of unreleased songs “that stood the test of time.” The result is How About Some More Ether: Collected Works 90-95, a six-disc incredible retrospective of unreleased and remastered material from the Solid Doctor back catalogue. The discs are released on his own Déclassé label which he started in 2014.

The 24 tracks are what you would expect from the 1990’s down tempo electronic music genre that Steve Cobby is a prolific composer of. Samples of vocals, philosophical musings, and other electronic flourishes create a relaxing, ambient soundscape. The first two discs feature the remastered tracks from the original four twelve inch records, Losing Patients. They run in the original order but without segues. Discs three and four are the bulk of “new” material.

The tracks that stood out for me are “Armed To The Teeth” (remastered) whose funky synthesized bass and inversion filters lead to a nice layering of automated riffs. “The Room Is Breathing” (remastered) contains a nice build with orchestration and voice samples added in very smoothly. “Land of Dope and Tory” (remastered) reminded me of a filtered Jamiroquai track.

From the new material, the kalimba sample in “The Vegus Nerve” and the syncopated grooves of “Hippolyte” add a nice lightness to the album. “I’d Like To Take You Out” has a memorable lounging, funky wah-wah groove with a bassy, filtered vocal that gave a nice upbeat addition to the mellower overtones of the album. I was not a fan of “O Say Krevlon-Trim”. I can intellectually appreciate the nod to the CD skipping technology, a very ‘90’s problem, but it came across as rather jarring in the otherwise floating, ethereal collection.

Solid Doctor formed Fila Brazillia with David McSherry in 1990. In the same year, he co-founded Pork Recordings with David Brennand. He’d go on to found Slim Lister and Steel Tiger Records before founding his own Déclassé label, which released his 2014 hit, “Saudade”. Over the next fourteen years, Fila Brazilia released twelve critically acclaimed LP’s and produced over 70 remixes for artists as diverse as Radiohead, Busta Rhymes, Black Uhuru, Simple Minds, James, A certain Ratio and Moloko. Cobby released solo pieces as The Solid Doctor, JJ Fuchs and Testosterone.

To have a six-disc retrospective from Solid Doctor, an accomplished musician and producer in his own right, is a fresh throwback to a solid, well-loved genre. Perfect listening for lazy dog days of summer.

Talia Wooldridge is an avid music lover, composer and ethnomusicologist who contributes artist interviews, live concerts, festivals and album reviews for Spill Magazine. She has written extensively on the intersection of music, personal identity and cultural symbolism with an early focus on Latin American Hip Hop and female Cuban rappers. In her spare time, Talia writes, composes music and manages Music Can Heal, a non-profit that brings live, award-winning musicians to inspire healing in hospitals, hospices and communities in need. Her next project is an interactive music-travelogue exploring music cultures and music travel around the globe. Follow her here: www.taliawooldridge.com + www.movetoyourownbeat.com.
RELATED ARTICLES
album reviewsdéclassé recordingsfila brazillia
8.0