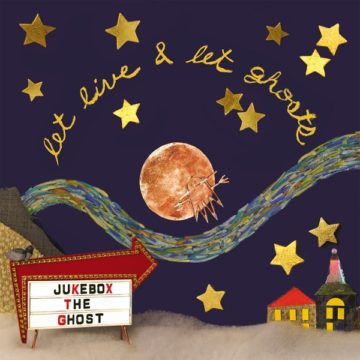 From Billy Joel to the keyboard kid in School of Rock, pianos haven’t always been considered the “cool” instrument in rock. No one told Jukebox the Ghost. Their cheery, piano-driven debut album, 2008’s Live and Let Ghosts, is getting a well-deserved tenth anniversary reissue.

Like fellow pianist Ben Folds, to whom these guys have often been compared (even touring with him after Let Live and Let Ghosts), Jukebox the Ghost’s music works because they embrace their insecurities and don’t try to sound tough. “Oh my god, if I tell him, he’ll tell her/Then she will know I like her”, frontman Ben Thornewill sings on “Hold It In”, setting the tone.

At times Thornewill’s dramatic voice, accompanied by theatrical musical touches, can be grating. Slower cuts like “My Heart’s the Same” play up the melodrama but lack the enthusiasm or catchiness of the other tracks.

On Jukebox the Ghost’s twitter there is a photo of the band from ten years ago accompanying the Let Live and Let Ghosts reissue announcement. Each member is clad in a bright, V-neck sweater and mugging for the camera. They look nerdy as hell, but they own it with confidence. It’s an encapsulation of everything they do right on Let Live and Let Ghosts.

Spill Magazine strives to keep our readers up to date with news and events in the music industry. We keep you informed of the most recent information regarding new releases, tour dates, and information items about your favourite artists.
RELATED ARTICLES
album reviewalbum reviewsyep rock records