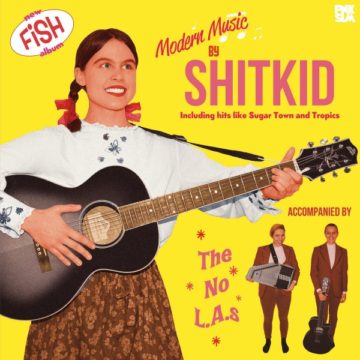 Sweden-based songwriter Åsa Söderqvist began releasing irreverent, bedroom-constructed garage pop under the name ShitKid on Soundcloud and Bandcamp early last year. It wasn’t long before audio streaming crate diggers began to latch on to the super minimal quirkiness of the 24-year-old Söderqvist’s one-woman band. ShitKid was quickly picked up by Stockholm-based label PNKSLM Recordings, and began to garner some buzz from American rock rags like Spin and The Fader.

American West Coasters like Colleen Green have been dining out on minimalist, repetitive, DIY construction with garage pop hooks for a while now. In fact, Fish would have probably found a home pretty easily on Art Fag Recordings around five years ago. While there is nothing groundbreaking about the formula, Söderqvist’s playful perspective and idiosyncratic vocals steal the show here. Like the Beat Happening or even Vampire on Titus-era Guided by Voices, ShitKid uses consumer grade recording equipment to give the visceral energy of big beats and noisy guitar tracks a diminutive, charming quality. Songs like “Tropics” are more developed and crafted while the chugging ‘Two Motorcycles” gives Söderqvist room to vamp with aggressively sweet, warbling vocals.

According to Söderqvist, the name Shitkid derives from a Swedish boogeyman story told to irk kids before bedtime. The moniker also works to denote Söderqvist’s cheeky and DIY aesthetic. Tracks, like the single “Alright”, build off of a single guitar riff and do little to deviate, disregarding the need for bridges or even chord changes to signify a chorus. Nevertheless, Söderqvist’s sense for punchy, driving melodies creates a texture that is both familiar and interesting.

The Spill Magazine is a Toronto-based online publication dedicated to covering the independent music scene with a strong focus on our thriving hometown talent. Our writers bring you up-to-date news, in-depth features on musicians and reviews for the latest CD releases. We also travel to the front lines for all local festivals including Canadian Music Week and North by Northeast. Don’t forget to check out our Facebook and Twitter pages for all daily Spill updates.
RELATED ARTICLES
album reviewsalrightfish
7.0