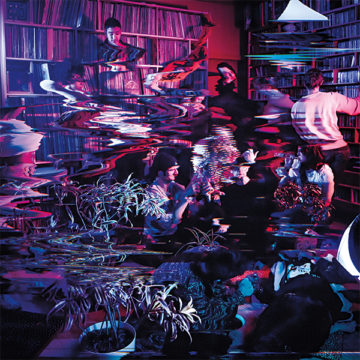 Zachary Saginaw, a.k.a. Shigeto, has always been a musical chameleon, and the genre-bending groove master is at it again on his latest album, The New Monday.  His first full-length solo project since 2013’s No Better Time Than Now sees Shigeto partially departing from his traditionally introspective sound, and encouraging his listeners to head for the dance floor. Opening with a kick drum that makes the listener feel as if they had just entered a party deep in the heart of the city itself, Saginaw’s latest effort draws its main influence from his hometown of Detroit.  Although often portrayed unflatteringly, the Motor City has an unparalleled musical history, and he draws from that history to remind the listener that the city’s pulse is alive and well.

Songs like “Icebreaker” and “There’s a Vibe Tonight” pull from Detroit’s techno roots, while also showcasing Saginaw’s innovative talents for mixing and blending a variety of different sounds. On the latter, he combines a deep bass and keys with a percussive groove that makes it impossible to sit still.  On top of that, songstress Kaleena Zanders provides the jolting energy that makes the song the album’s clear climax; the point at which Saginaw’s party is at its most lively. The saxophone driven “In Case You Forgot”, and album closer “When We Low” serve as soulful intermissions from the energy that Shigeto manages to maintain for most of the album, while frequent collaborator ZelooperZ also switches things up by lending his frantic flow to two tracks.  One of these is album standout “Barry White”, which sees Shigeto’s relentless groove play straight man to the Brusier Brigade affiliate’s off-key howls, creating a stark contrast that keeps the track interesting despite its nearly six minute run-time.

Shigeto has always been a master at blending sounds and genres to create cohesive projects, and although The New Monday sees him pull influence from yet another musical well, he still manages to create a project that is unmistakably ‘him’. Right when the album verges on stagnation, a well-placed feature or change in pace is there to break it up and keep things interesting.  Song times do run a bit long on occasion but just like in Detroit, so does the party; and when Saginaw is the host, that’s a damn good thing.

Troy Black is a photographer from Mississauga, Ontario. Formerly signed to play professional baseball, injuries ended his career and set him on the path that see him picking up his first camera, and developing a passion for concert photography. Although mainly a hip-hop fan, Troy has musical preferences include metal and electronic music as well. You can follow Troy’s photography on Instagram at @troycblack, or on twitter via the same name.
RELATED ARTICLES
album reviewsghostly international
8.0