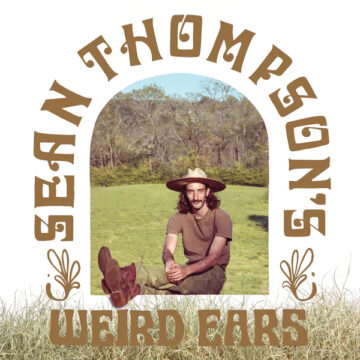 The debate on what constitutes Americana music, whether there are any connected genres (like Canadiana) and what else should be included and what not is still raging on. Yet, there are certain musical elements that should be considered there that everybody agrees on – country, folk, roots, and connected rock sub-genres.

On his debut album, Nashville-born Sean Thompson, under the title of Sean Thompson’s Weird Ears doesn’t enter the fray with any elements that might prick up the ears of Americana purists and sticks to all the above-named elements that everybody agrees on. The problem for Thompson there could have been too much of the middle of the road and some sort of tepid music.

Luckily for Thompson and his potential listeners, he knows exactly what he’s doing here and the results are quite shining. It is a combination of the latter-day Allman Brothers combined with The Byrds country era, with touches of J.J. Cale, all heard through the ears of The Grateful Dead.

It seems that Thompson knows all of these Americana/rock greats quite well that he has made them practically his own, turning his combination of those sounds into something that fits late summer/early autumn almost perfectly.

Formerly a lot of things, including a journalist and a translator, currently a freelance writer living in The Netherlands.
RELATED ARTICLES
album reviewalbum reviewscuration records
8.0