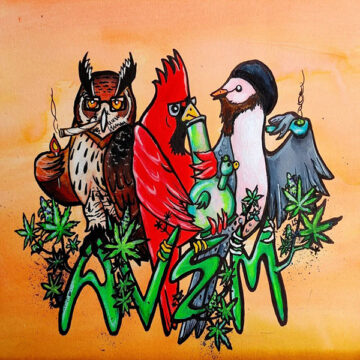 Ontario’s premier band of ornithologists, Avem, have released their first full-length album. Three Birds Stoned follows a series of singles released throughout the year from the fowl pop punk trio and sees Avem soar while refusing to take themselves seriously.

Opening with “AVEM”, the band asserts themselves as birds of prey – they’re no chickens – not to be tread on through an aggressive array of power chords that make an anthem of a song that was clearly written as a theme song for the band. Between this and the artwork of three birds indulging in three different methods of smoking marijuana, the Adult Swim spin-off almost writes itself. The album continues with nostalgic pop punk tones paired with lyrical themes you’ve never heard of as the band warbles through “Rat Race” and “Let’s Go Watching”.

What makes Three Birds Stoned such a unique album is their lyrical content. By associating human perspectives and problems to the likes of our feathered friends, Avem, for all the fun they’re having, are an ecologically driven band. Songs like “Mother Nature Really Sucks”, “Keep You Safe”, “Pre-Suburban Paradise”, and “Just Like Me” are surprisingly mature in their lyrical depth and their personification of avifauna. On the other wing, however, Avem also know how to have fun with their music, which makes their pop punk style enjoyable. Songs like “Red Winged Blackbirds” will have you quacking up like a loon as the band doubles down on their hijinks, all without eating crow.

It should be ill-eagle (last one, I promise) for a bird punk band to be this good. Think of Blink-182 if they were really, really into birds, and you’d have Avem. Front to back, Three Birds Stoned is a fun musical experience that is truly unlike anything else out there, leaving listeners cuckoo (I lied) for this pop-punk flock. All in all, Avem demonstrate that bird really is the word.