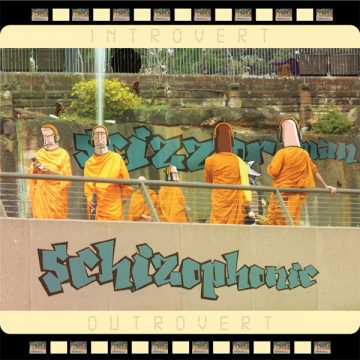 Scizzorman is Terry J Vinci, drummer and producer from Perth, Australia, who like many other acts from ‘down under’ shows a penchant for quirky, off-kilter musical combinations. SCHIZoPHoNiC is actually two things at the same time it is an album, but is also two split EP’s (Introvert and Outrovert), you take a pick. But do pick it up. Or them. Whichever.

Why? Because Terry, along with the help of his son Adrian and two other Perth cohorts comes up with a left-field musical combination that actually works – anywhere between the early Go-Betweens (they were from Brisbane, but no matter) and mutant funk of James Chance & The Contortions. A bit of New York cool for good measure, I guess.

You don’t have to go any further than “Them (are not The Us)” or “Skin” to hear Vinci’s subtle beat combinations that never overpower the melody lines, that take a direction of their own. No musings about James Joyce or Jack Kerouack, akin to Go-Betweens Robert Forster, but Vinci does go through some serious stuff like climate change and social upheaval in his lyrics and does well in that respect too.

At a first listen SCHIZoPHoNiC seems a bit unassuming, but turns out to be one of those albums that seem to be coming back to your music playing system whether you want it or not.