SPILL ALBUM REVIEW: SAY SUE ME – WHERE WE WERE TOGETHER 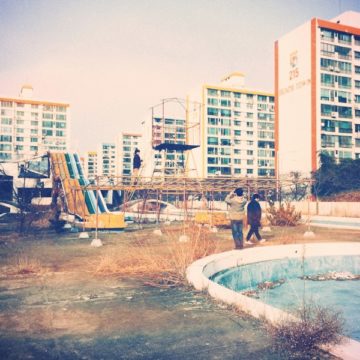 Say Sue Me
Where We Were Together
Damnably

There is something decidedly timeless about surf-rock, especially when it melds with the classic washed-out vocals of its genre cousin shoe-gaze; in general, it is a sound that would fit as easily on a ’90s playlist as one made in the last year. Groundbreaking a genre it is not, preferring to cozy up to other more vital genres, and just chill out for a bit, not wanting to rock the boat too much. Say Sue Me, a Busan, South Korea-based band break little ground themselves with their 2018 album, their fifth as a band, Where We Were Together, a soft, sometimes sweet, and catchy album that won’t move you much emotionally, though it is definitely toe tap friendly.

(side note: this band is listed as K-pop on some sites, but I defy you to listen to the first 30 seconds of this album and find even a remote similarity; being from South Korea should not limit you to one genre, especially considering the freedom of audience that the Internet allows)

Though the album’s tempo is on the slow side over the first four tracks (lots of quarter notes here), its standout tracks are the two that are the most up-tempo, “I Just Wanna Dance” and “B Lover”, which feature bright and vibrant guitars, as well as a lot of snare and cymbal splashes. Their placement on the album, following the almost nauseatingly saccharine “Funny and Cute” breathes much-needed life into the album when it seemed to be limping towards a jarringly soft conclusion. Most interesting, in name and production alike is the instrumental tenth track “About the Courage to Become Somebody’s Past” which features hazy, softly toned guitar on top of a layer of almost industrial feedback, before fading into the sunset with only those bright guitar tones as company.

Where We Were Together feels best-suited for a sunny summer road trip and with spring dragging its heels, this album may be just the antidote, even if it is not one that will compel or transform in the way that many of the best albums of this year already have.

SPILL ALBUM REVIEW: SAY SUE ME – WHERE WE WERE TOGETHER

Br. lives in southern Ontario, grew up on The Beatles and The Journeymen, spent his adolescence immersed in grunge, and his adulthood in British alternative. His greatest joy is seeing his son dance and grow into his own appreciation of the indescribable joy of music...
RELATED ARTICLES
album reviewsdamnably
9.0