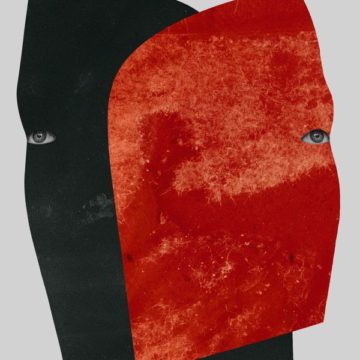 The true wonder of this album is that you learn everything that you need to know about the following 12 tracks in the first minute of the first song – there will be relentlessly-crafted tension, there will be unexpected lift, and there will be a constant and steady percussive force that carries you through every moment.  Now that is a revealingly impressive 60 seconds; equally fitting that the first track on the album is entitled “Unfolding”.

Electronic music may be the most genre-diverse of all styles of music and as such, classifying style and content on a release such as this is problematic. What does stand out, all genre qualifiers aside, is the distinctly emotional impact of Persona; it has an intensity and motion that is undeniable and yet feels somehow human and relatable, like the songs themselves have been built around very recognizable human experiences. Ryan Lee West, the brain behind Rival Consoles, outlined the album’s theme as “an exploration of the persona, the difference between how we see ourselves and how others see us…” so perhaps it is fitting that it feels so personal and almost intimate in its construction and production. How else could moments such as those that are crafted in the middle of “I Think So”, the album’s sixth track, be described? There is a synth progression propelling the song aggressively forward while simultaneously full and open piano notes take centre stage, shifting the tempo;  this is a moment of indecision, of possibility, of decision-making and for 60 seconds, it is beautifully optimistic, before we are led in another direction again, forced to succumb to tempo and pressure and above all, humanity.

Equally compelling as the sole focus of your attention or as the ambient background to your day-to-day like, Persona is an outstanding album that is a real showcase of Ryan Lee West’s vision and skill as a musician.

Br. lives in southern Ontario, grew up on The Beatles and The Journeymen, spent his adolescence immersed in grunge, and his adulthood in British alternative. His greatest joy is seeing his son dance and grow into his own appreciation of the indescribable joy of music...
RELATED ARTICLES
album reviewspersona
9.0